Connor, Rowan, and I took a brief trip out to Starrigavan today to see the high tide. With a predicted high of 12.2 and observed levels this morning that were pushing over half a foot above predicted, I thought there was a good chance we would find the water higher than it had been through all of last year. When we got there, I was a little surprised to see just how high the water was. At first I had only planned to get out and look around a little bit, but with 20 minutes or so to go before the actual high, and water covering much of Nelson Logging Road, I thought it would be worth braving the rain to walk around the boardwalk.

As we came walked toward the upper end of the estuary, the water was up to the base of the boardwalk, even covering part of it on the spur trail to the campground. Not much further along, the actual walking surface of the board walk was under an inch or so of water, the first time I’ve ever seen that. At the short spur nearest the bridge over Starrigavan Creek, a couple of Song Sparrows were waiting out the tide in the branches of the salmonberry bushes that were tall enough to be above the water. Their preferred habitat of the estuary grasses and sedges were all quite flooded.

We decided to wade Nelson Logging road instead of back tracking on the boardwalk. I think it was over a foot deep in parts, though Connor said he never went over his boots (except for a time when he stepped aside for a passing vehicle and ended up in a deeper part where a roadside ditch was). I just rolled my pants up and took my shoes off, the water was chilly, but tolerable. The couple of vehicles that drove through while were there pushed up quite a lot of water. I wouldn’t think it was very good for them, but it’s probably pretty fresh water. One of the drivers told me that it appeared the road was washing out a bit further up.

Given the 12.7 height of last year’s highest and how much of the road it covered, I’m guessing the water levels at the road were well over 13 feet and perhaps even pushing 14 feet (tide level-wise). However, the preliminary observation was right at 12.999 feet for today’s high. My guess is the heavy rains of yesterday and resulting high flow in Starrigavan Creek backed up a bit in the estuary and caused water levels behind the relatively narrow outflow to be even higher than the tide would have been on its own.

One other interesting thing we noticed was a Common Murre not far out in Starrigavan Bay. 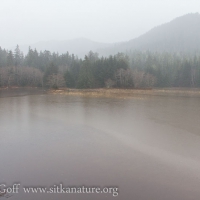 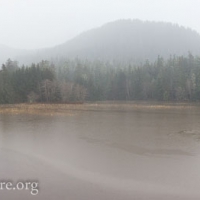