A year ago today I I semi-jokingly wrote about the highest tide of the year on the first day of the year. But with few, if any, tides predicted to be over 12 feet for the rest of the year, and the tides on subsequent days just a bit lower, it seemed like there was a chance it could hold up.

It’s hard to tell on the plot below, but the high tide on 1 January was 12.34, while the next two days had tides within a couple of inches, but not quite to the mark set on the first. 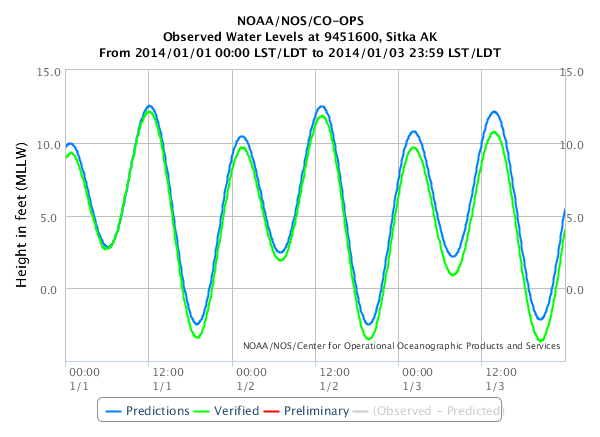 It took all the way until the third week of December this year before we saw tides that high again. The highest forecast tides were for the 22nd and 23rd (at right about 12 feet), so I kept an eye on the observed water levels at the Sitka tidal gauge, and saw levels trending below predicted, but upon seeing levels above predicted on the 23rd was eager to get out and check things out at Starrigavan.

Through all of this, I had not really looked carefully at the tide on the 20th, as it had been predicted at only 11.3 ft, a full foot below the high on the first of the year. However, when I was looking along Nelson Logging road, it became clear that the tide had been a little bit higher previously, as there was a line of grass fragments along the road maybe a vertical inch or so above the high point on the day I was there. When I got home and checked, I saw that the 20th had an observed high (preliminary) of 12.7 ft, almost a foot and a half above predicted. The 23rd was above predicted, but only about half a foot and it topped out at 12.6 ft. 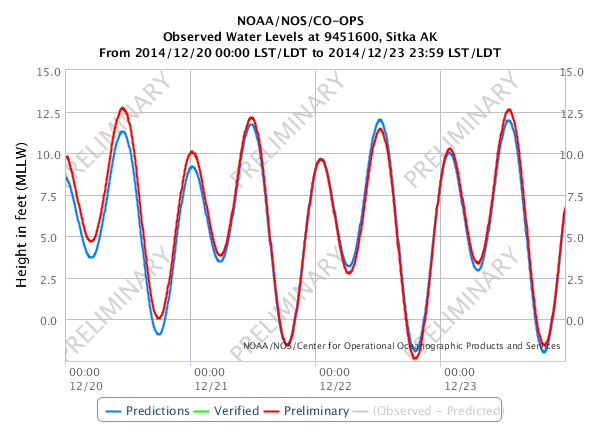 This coming year looks to be a better year for highs, perhaps we’ll even crack 13 ft for the first time in a while. There’s a 12.25 ft tide predicted for the third week of January (though it’s not really the time of year we tend to see as much low pressure), but even more promising are tides predicted to be in the neighborhood of 12.5 feet in late October and late November. It wouldn’t take much of a well timed fall low pressure system to get the water up over anything we saw this year. I’ll keep an eye out…