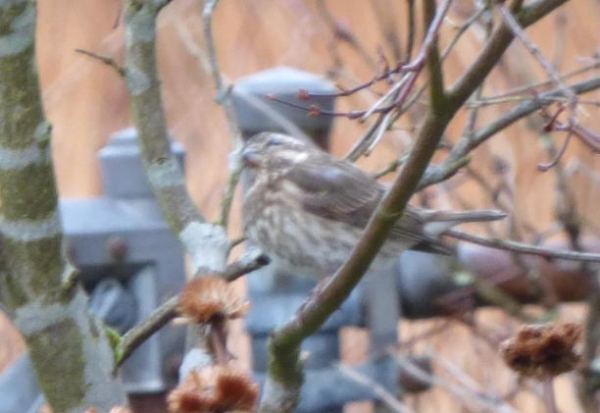 This afternoon my kids were checking on a Biorka Street yard that has been hosting Bohemian Waxwings regularly when they noticed a bird that looked unusual to them. Connor was able to get a couple of shots before it flew out of sight behind a house. Rowan watched for it while Connor ran back home and got me, but despite spending the next hour or so out and about, we did not find it again.

When they got home, they looked through the bird book and came up with Purple Finch as the most likely candidate. Having never seen one, I’m unfamiliar with Purple Finch and was hesitant to come to any conclusions, especially given the rarity (and the fact that one has not been previously reported here that I know of). Connor posted his pictures to inaturalist, and had someone there agree with his id, while I passed the link to Steve Heinl who also confirmed the photos showed a Purple Finch. So it was a very nice find for Connor and Rowan, and I’m glad Connor was able to get identifiable pictures for documentation.

Although this species has shown up in a handful of other Southeast Alaskan towns, as far as I know, this is a first record for Sitka. We’ll keep an eye out for it (I know I would like to see it and get pictures) and I’ll let folks know if it shows up again. 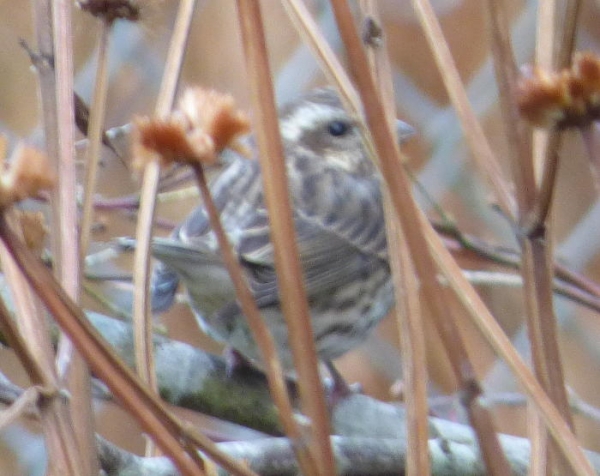