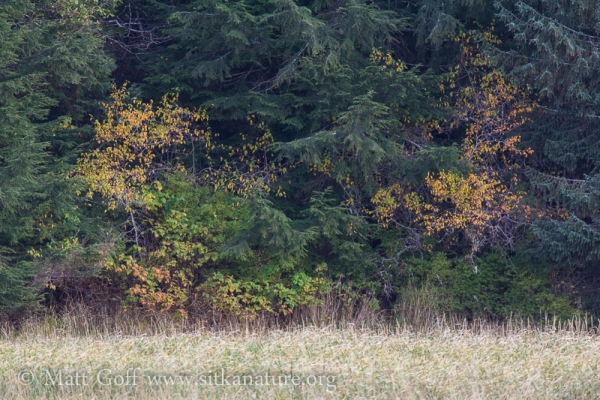 It seems like every fall I spend a little time making special note of some of the pockets of color that I find, and this year was no exception. On a mid-October trip to Starrigavan Estuary I noticed there were several Pacific crabapples (Malus fusca) with yellow leaves tucked between the dark green boughs of large evergreens lining the estuary. Beyond the paler green of mature red alders (Alnus rubra) that have grown up along a stretch that had seen significant disturbance in the past. Of course beyond them, the expanse of conifers broken by the occasional gray column of a decaying, but not yet fallen, snag.

More recently, I was back at the estuary and noticed some of those crabapple leaves had turned a deep red. Perhaps it’s due in part to the relatively mild (wind/weather-wise) fall this year, but I don’t recall noticing that color on native plants around here except on the occasional isolated leaf or branch, while these seemed to be more like entire trees (small as they were). I briefly considered pulling out my camera to take a picture, but decided against it since it would have required changing lenses. Now I find myself wishing I had made the effort, though wondering at the same time if my memory of red leaves a more compelling image than a photo would. 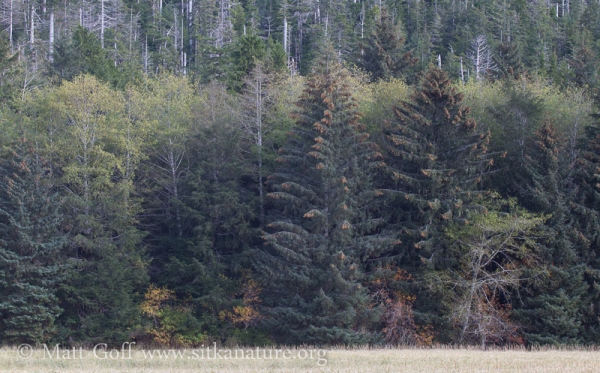