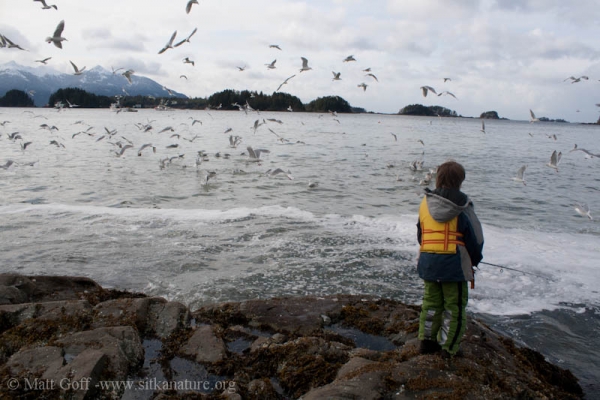 It’s not quite the official beginning of winter, but planning for spring is already starting to occur. Today Pacific Herring were in the news, so I decided to post a photojournal entry from last April during herring spawning time (the picture that leads this post is from that entry).

Today’s news was about the preliminary guideline harvest level of 29,000+ tons for the herring sac roe fishery. Although subject to revision pending winter test fisheries, it would be a nearly 10,000 ton increase over last year’s harvest (which was either a record, or pretty close to it). I don’t pay a huge amount of attention to it all, but I do know the quota is not without controversy. Herring is an important food for local humans as well as many other species of fish and mammals and the history of herring fishing around the world isn’t particularly inspiring. More than a few people are concerned there could be a crash of the stock (like there has been almost everywhere else herring has been fished commercially). On the other hand, the state fish and game argues they are using the best available science to manage the fishery, and so far the fishermen seem inclined to catch as much as the state says they can.

Personally, I’m not really sure what to think – with a background in mathematics and statistics, I’m curious about the model they use. I wonder how much they test it (via simulation) for behavior if assumptions aren’t met – how much they quantify the error in their estimates, and how good that quantification of error is. In recent years the population of herring has seemed to increase dramatically, and I think I remember hearing the demographics have changed as well. However, I’m not sure if anyone knows why – and if that isn’t known, then I wonder if it will it take too long to notice if/when conditions revert to keep the population from crashing due to fishing pressure and poor recruitment? On the other hand, if abundance really is driven by ocean conditions (which seems obvious, at least in part), then perhaps it doesn’t really matter how many fish are caught (within certain limits, anyway). After all, there has been heavy fishing pressure for years, and the population seems to have been increasing.

Clearly I have far more questions than answers – and that being the case, I’m sympathetic with the idea that perhaps there should be some sort of hard cap on the quota since I think it’s a good idea to be more conservative than not when it comes to a resource like herring. However, I am interested in the modeling and such, and if I had a better sense of what’s going on there, I could imagine getting to the point where I was convinced high quotas of recent years were sustainable. That said, I’m not particularly politically inclined, so I find it somewhat frustrating to try sorting through the strongly held opinions (some more informed than others) to have a good and/or informative conversation about the subject, so I mostly just leave it alone.