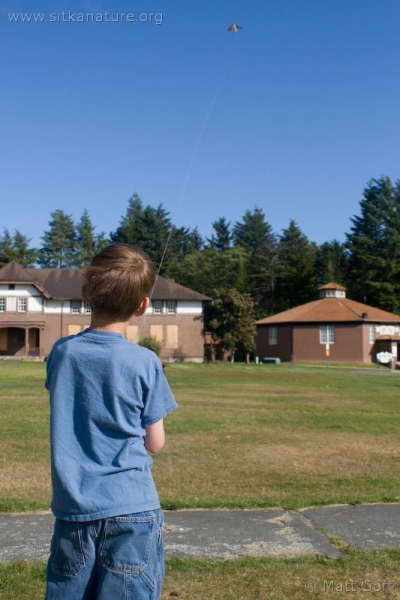 The short version
As a child, with the wind I flew kites
My kids want their own to take flights
Kites Up! Now in Trees!
Dad, rescue them please!
Now flying again to the heights

The Long Version
When I was about Connor’s age, I spent many summer hours flying kites down on the Sheldon Jackson College lawn. Given the way time and memory seem to work, there may have only been a handful of days that I flew my kites, but I do remember multiple afternoons spent watching the tiny speck of a kite several hundred yards distant.

Sunny summer afternoons are often accompanied by fairly strong sea breezes, and the extense of campus lawn, mostly free of obstacles, provides a good place to get a kite up in the air. I remember discovering when I was younger that when the kite got well up in the air, the wind seemed to be much more steady. After a little work and attention to keep the kite flying upward for the first spool or two of string, I could usually just let the string go at a steady rate and feed out as much as I had. I do not remember the most I ever let out, but I do know I tied quite a few spools of 100 yard kite string together.

This week has been just about perfect for flying kites in the afternoon, but for some reason today was the first time it occurred to me that Connor, Rowan, and I could take their kites down to fly them. They each had a brand new kite their grams had purchased for them some time back, so we took them and headed down to the lawn.

It took a few minutes to get Connor’s peregrine falcon kite put together, and while he was trying to get it up in the air by himself, I put together Rowan’s slightly more complicated butterfly kite. Connor and I were then able to get his kite up in the air high enough that it was reasonably stable, though it still required attention to keep it from going into a nosedive that it would not recover from. I gave Connor a couple of suggestions and then went to help Rowan get her kite in the air.

Rowan and I were able to get her kite flying, and I was giving her a couple of pointers for keeping her kite up when I realized that her string was going to cross with Connor’s. It had not occurred to me that different kites might fly at different angles to the wind, but that seemed to be exactly what was happening. There was not enough space to keep the strings from touching, and it took only a short time for Connor’s string to break from the friction. Free from it’s anchor, his kite started blowing back toward the bottom of our hill, and I told him to go look for it, since it looked like it would land somewhere accessible. Meanwhile, Rowan’s kite was still flying strong, so I handed it off to her and watched for a couple of minutes to be sure she had the hang of it.

I found Connor winding up his string while looking up at more draped in the trees at the bottom of the hill. His kite was apparently suspended in those trees, though he had not actually seen it. I told him to go give his sister a hand while I tried to recover his kite. I hadn’t made much progress on his string, though I had spotted where the kite was dangling high in a tree, when he returned to inform me that Rowan’s kite had become stuck in the large spruce in the center of the campus quad. I sent him to tell her not to pull on the string and set about trying to figure out if there was any hope for his kite.

Connor’s kite was well up in a tree that I would not be able to climb without a ladder (and even then, not easily). However, string still attached to the kite was mostly hung up in branches lower branches, so I freed it as much as possible and told Connor to watch is kite in case the wind started to blow it down. I figured climbing would be the last resort.

I returned to the quad to find a very sad Rowan sitting with her head down below the tree with the kite string stretching up from her hand into the tree branches above. She had not thought about the fact that her kite could fly into the tree, so had not taken any steps keep the string away from the tree. Not hearing Connor pass on my warning to not pull on the string, she had pulled on it and probably made it get bound up a little tighter in the branches. However, I suspect it was tangled even further by the efforts of a friendly passer-by who apparently pulled even more (and went so far as to climb the tree to see if he could get it out, though I didn’t find out about that until later). By the time I arrived, the string was inextricably wound around the end of a branch, and no amount of changing angles, giving slack, or pulling would help it release (spruces are particularly clingy in such circumstances). In the end, I just pulled until it broke, but the kite itself was just dangling, so it seemed like if I could free the string (or at least break it close enough to the kite), the kite would be free to fall down, or get blown out with a decent gust.

Large open grown spruce trees often have branches as far down as there is light and on a tree that has not been pruned back, these branches can be quite large. The large lower branches made climbing the tree relatively easy, though there is a downside; spruce trees are also quite prone to leaking sticky sap. The sap has a pleasant resinous smell, but it is hard to clean. The kite itself was too far out for me to reach, even going out the limbs. I tried shaking the branches, but that did not dislodge the kite, either. Not ready to give up yet, I decided to climb to the top of the tree and was able to reach the string there. However, all the pulling I could muster did not do much to free the kite, I merely managed to break the string a bit closer.

Meanwhile, the gusting wind had freed Connor’s kite from the branches, though it was still attached to the string which was hung up in the branches. The kite did seem to be slowly pulling the string through, and I told Connor to stand there and watch it in case it came free, or pulled enough string through for the kite to reach the ground. By the time I was done climbing after Rowan’s kite, Connor had his kite in hand. I broke the string for him and pulled the other end until it also broke, leaving a section of string draped in the tree, but we had plenty remaining to fly his kite with. With Connor’s kite now retreived, he and I got it flying again, while Rowan visited with a new friend she had introduced herself to while I was climbing after her kite.

My only remaining hope for getting Rowan’s kite was to get a stick long enough that I could reach the kite with it. After flying his kite for a few minutes, Connor volunteered to go look for a such a stick. When he returned with a old branch that was 3 or 4 inches in diameter and 8-10 feet long, I wasn’t sure it would be adequate, but I figured it was worth a try. Unfortunately, it was not long enough to reach the kite from near the trunk, so I climbed further out on the branches. They were plenty sturdy enough to hold my weight, and there were enough of them that I had many things to hold on to, but I’m still not sure how sensible it was to be out there while trying to reach out with a large stick that was very awkward to maneuver (I certainly would not have been thrilled to see Connor or Rowan doing something similar). Despite the awkward moments, I was able to get out far enough to get the kite string hooked on the end of hte stick and pull on it until it broke and released the kite. From there it was a simple matter to climb down and knock the kite out of the lowest branches where it had landed.

We did try flying Rowan’s kite again, but unfortunately one of the support sticks had broken, and the kite was not inclined to get much lift except in the strongest gusts (which by this time were infrequent, as the wind seemed to be settling down a bit).