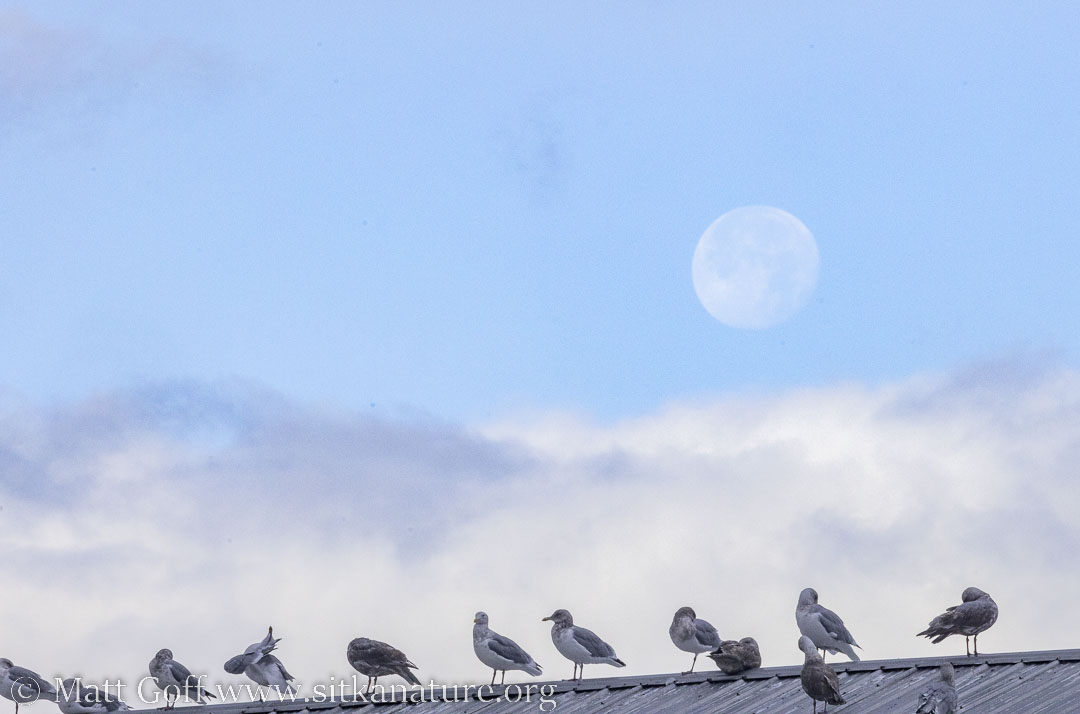 Mostly cloudy with some low clouds early, becoming heavy overcast with rain by the afternoon.

I had an early call that didn’t last very long. With a couple of hours before my next call, I decided to get out and take advantage of my early rise time and a bit of a break in the weather.

I was reminded that I do enjoy being out in the morning when I manage it. It’s just not enough enjoyment to motivate me to get up early and get out.


I did briefly catch the waning gibbous moon through a gap in the clouds.

I walked around downtown and Castle Hill, but didn’t spot any warblers.

I did see an Orange-crowned Warbler working salmonberry bushes across from Swan Lake.

The Wood Ducks weren’t out and about when I stopped by, though I later saw an ebird report of them.

A couple of folks came to town hoping to find the Heermann’s Gull. They were focusing on the park and the channel the times they messaged me after arriving.

When I went back out this afternoon I drove out to each end of the road to see if it might have joined the gulls at one of the further out hangouts.

The tide was up, and I think that influenced where the gulls were. I saw only a few gulls at the mouth of Sawmill Creek, and pretty much none at Herring Cove.

There were a few more at the Starrigavan end of the road, mostly on a barge and the ferry terminal dock.

Waterfowl numbers can fluctuate greatly from day to day as south-bound migrants move through.


From Eagle Way I could see large numbers of Surf Scoters, Harlequin Ducks, and Barrow’s Goldeneye. There was also a smaller flock of Surf Scoters at Starrigavan. It seems diving ducks are starting to move through in larger numbers.

I saw a few juncos and a couple of Song Sparrows visiting the bird seed I had tossed out at the kelp patch pull out.


I was surprised to see a Common Murre right near shore a bit towards town from the kelp patch pull out.

I checked the channel for a bit, but it had quieted down since the processors weren’t putting out any gurry.

By this time the tide had fallen enough that gulls were beginning to gather on the beaches at the park.

My last stop before heading home was a walk out to the end.

Hundreds of Surfbirds did their best collective impression of beach cobbles


A good-sized flock of Surfbirds and smaller numbers of Black Turnstones were on the beach with the gulls. I didn’t spot the Heermann’s Gull.

The visitors showed up and I chatted with them a bit before a rain shower and time prompted me to start back.

Heavy clouds associated with the shower made for dim light in the forest. The juncos in a loose flock feeding along the path were a little hard to see when they weren’t move.