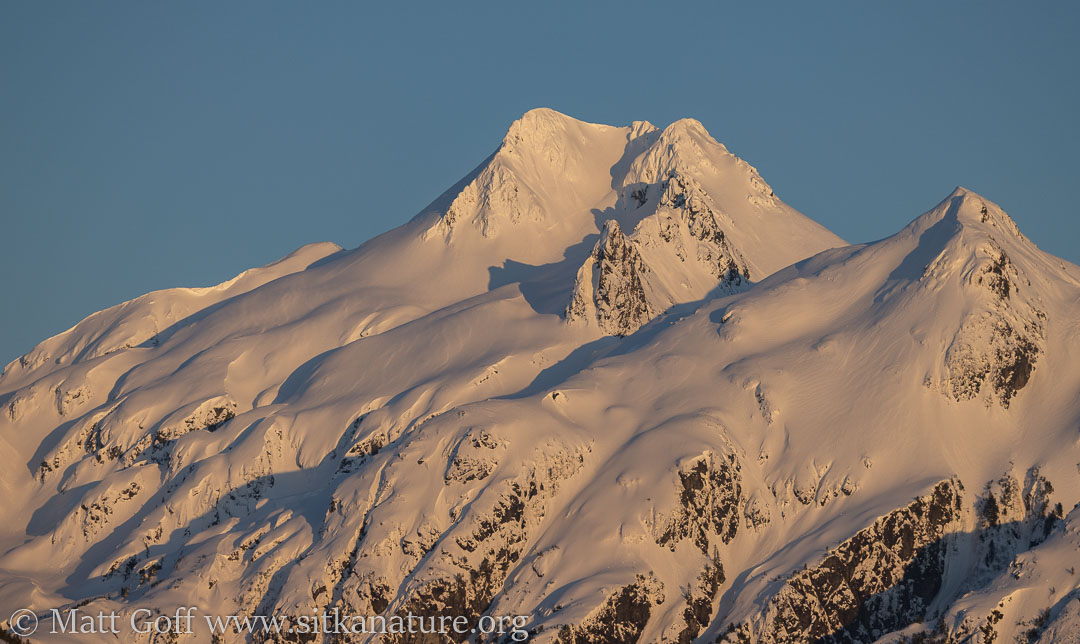 If I had more experience up high in the winter, I wonder if I could interpret the textures on snow I can see from below and be able to say something about snow conditions up there.

Sunny with frosty conditions this morning before warming to the mid 40s.

I heard a Song Sparrow and Dark-eyed Juncos singing outside my house this morning.

An early spring moth - these are difficult to get beyond genus.


I was a little surprised to see a moth at the light given cool overnight temps.

Before heading out for a bit this afternoon, I stopped by the radio station to get my radio show ready for tomorrow.

Low tide happened at 3:20pm. We’re still in the transition between fall/winter pattern and spring/summer pattern of tides. Today’s predicted 0.5ft tide is part of the evening low cycle (lower in the fall/winter) which will see it’s lowest level in a few days.

With an atmospheric assist the water was down to around 0ft. I was considering going snorkeling ultimately didn’t. I was discouraged by the surge at Sandy Beach and Magic Island parking lot was full. Also, by the time I had finished my show and checked the water, it was nearly 3pm.


I did drive out to Silver Bay to look at snow covered mountains with blue sky behind them. There have not been many opportunities to do that so far this year.


While walking I heard a Bald Eagle calling and was reminded of a nest that’s uphill from the road. (I had previously noted it when there was a large buoy in it.) I wondered if the eagle was on/near the nest. When I got back where I could see, the eagle did not seem to be especially close to the nest. I’m not sure if it was associated with the nest or just coincidentally in the area.

Back at home I sat outside on west side of the house. I don’t usually sit there because it’s closer to the road (and traffic noise). However, the shaded south step was not as compelling with the opportunity available to sit in full sun.

While sitting I noticed the clumpiness of raspberries. If I had been asked, I think I would have described the canes as more uniformly distributed. I realized today there seem to be descrete plants which send up a cane or two each year. They also send out runners, but those will come up some distance away (and presumably start a new plant).

After sitting I pruned away old raspberry canes and did a little pruning of fruit trees.


I headed back out to Silver Bay as the sun was dropping low.

This time I noticed some tracks in the snow extending a bit above treeline on Bear Mountain. I suspect a snowboarder or skier was checking things about but didn’t find conditions suitable for making a big run, and settled for a small run instead.

I believe these tracks were made by a snow boarder or skier.


It appears to me the person first hiked up the the side of the bowl (which I've gone up in summer). Then turned around and retraced footsteps.


After coming back down a bit, they crossed the bowl and made one short-ish run down and back to where they started.


I stopped at Whale Park and walked down to the shore. I saw the sun disappearing behind Mount Edgecumbe, but the view was only partial.

I saw a bumblebee flying around in the forest on my way down to the shore. It was my first of the year (though I’ve seen photos from other people who have seen them previously).

I continued working on photos/observations from last year this morning and more this evening. I am now over 5000 observations from 2021. I probably have 150-200 or so left to add. I will be glad to finish up before things really start picking up this year. I would like to do the same with all the collection I already have, but I didn’t make any progress on them today, and that seems less likely.