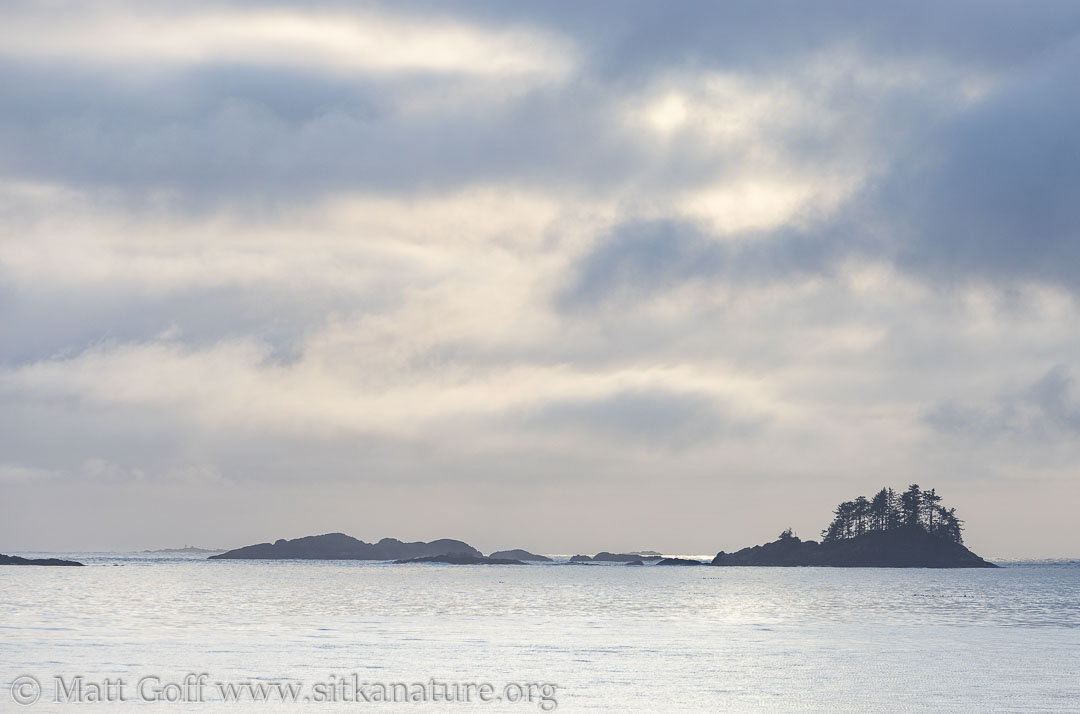 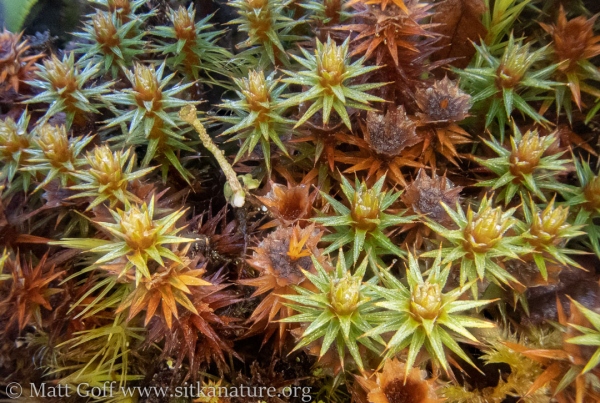 Heavy rain overnight tapered off to a light drizzle this morning. By late morning breaks in the clouds allowed sun to shine through. 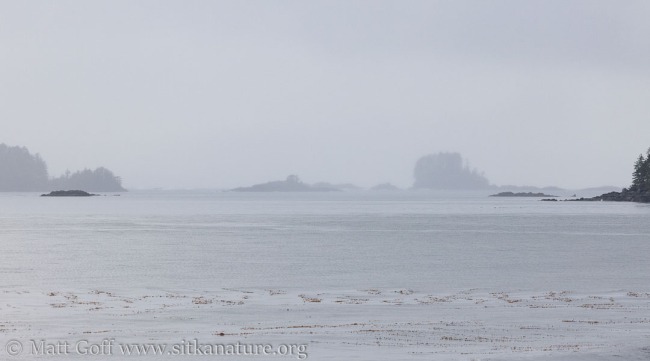 Yesterday’s rain ended up at just under an inch. Rain totals after midnight today added another inch or so. We’re up over 200% of normal for the year, and about 370% of normal for this point in February. But for the dry Thursday, we could have tied the record for consecutive days with at least a half an inch of precipitation.

My plans for the day became disrupted somewhat when an odd looking bird was posted on the Sitka Birds Facebook group.

It was eagle sized but the pattern of black and white didn’t seem typical. The photo was a distant cell phone photo, so details were not visible.

I headed out to try and get a look at it. It took me a while to get to the right location (it turned out the person had moved since I had originally heard where they lived). 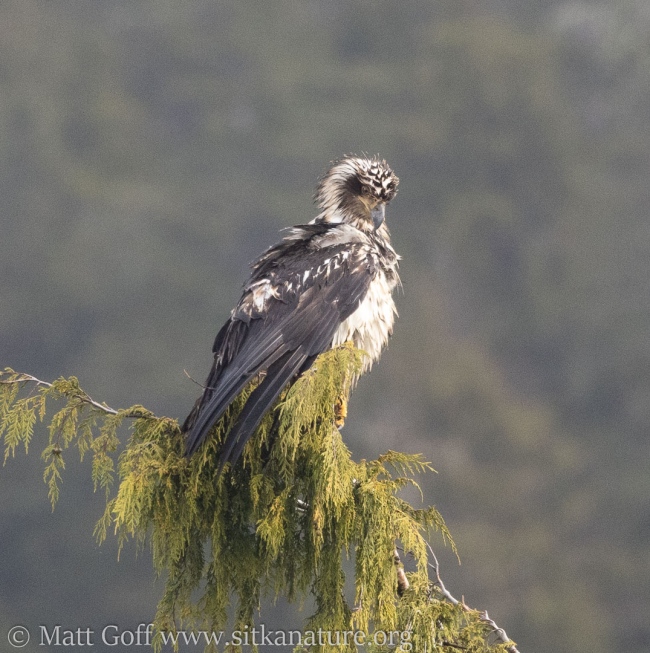 The bird was still there. It turned out to be a bedraggled sub adult eagle. Between the mix of feathers due to its transitional stage of development and the wet, matted feathers exposing more of the white inner feathers, it didn’t have the typical look of an eagle at first glance.

I chatted with the person who had reported the bird. I let them know I appreciated the report. I almost never hesitate to check out birds that are reported as seeming different. Even though many turn out to regularly occurring species, sometimes they turn out to be unusual ones. It’s a short drive to anywhere in Sitka, so not a big deal to take a look. It would bother me far more to miss one unusual bird than check out a bunches of birds that turn out to be typical.

After recording a conversation for tomorrow’s radio show, Kitty and I walked along old airport road. The Northern Shrike flew up from the road a fair bit in front of us. We saw it perch a handful of different places before losing track of it, didn’t manage to get a picture. 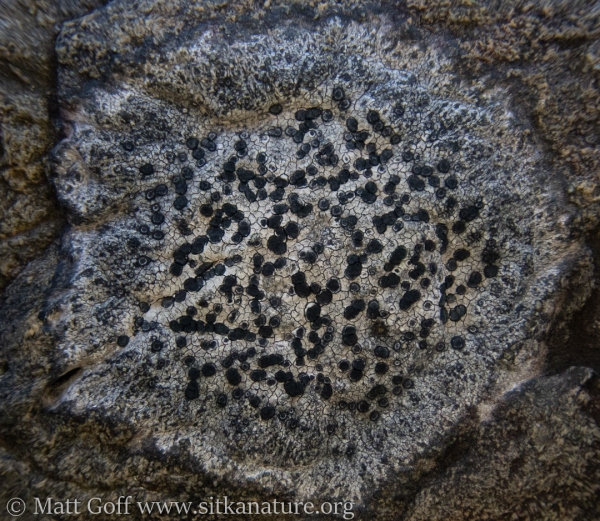 I returned to the airport lagoon to look around a bit later. I walked around on the rocks to see what I could see. 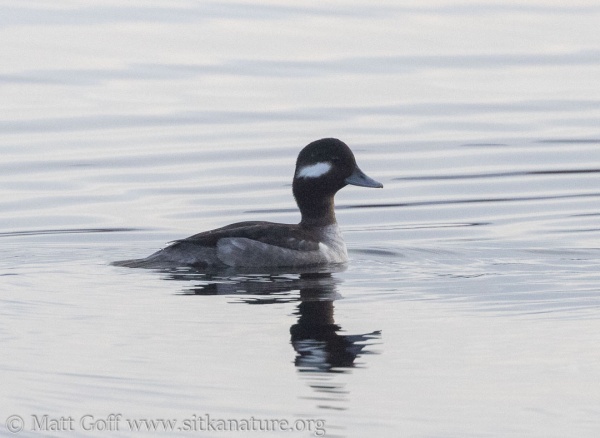 With the water there now ice free, some scaups have moved in, as have several Buffleheads. 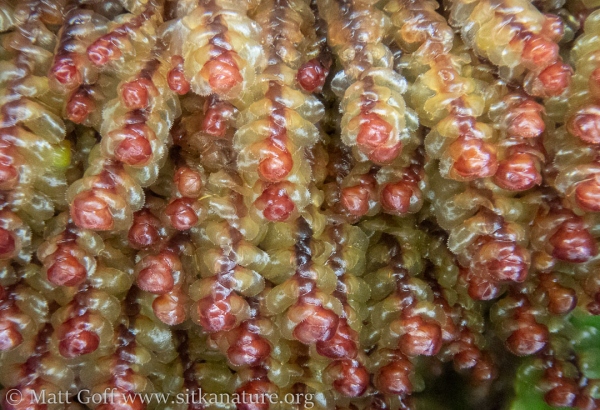 There’s an interesting mix of bryophytes and lichens growing on the rocks. It might be worthwhile trying to do a reasonably thorough survey at some point. I am curious how many different species there are in that relatively small area. I satisfied myself today taking pictures of a lichen, a couple mosses, and a liverwort.

The lower end of Swan Lake appears to be ice free. From around the area of the peninsula to the upper end, it’s still mostly covered in ice. Temperatures are forecast to remain above freezing for the week, so it seems likely the ice will all be gone soon.

Unlike most years, no Ring-necked Ducks have showed up in the open water on the lake. Perhaps none ended up sticking around this winter.