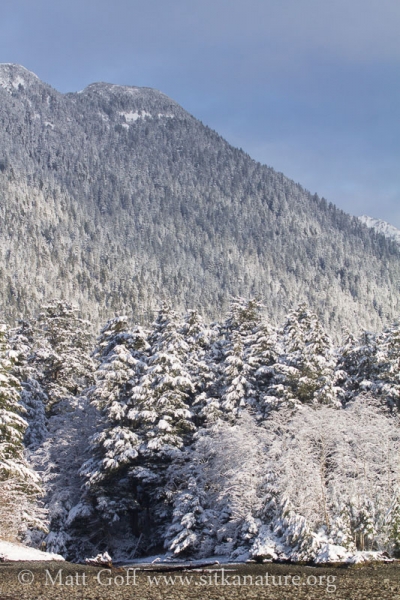 Snowy Day at Totem Park from back in February

Yesterday dawned with the first snow of the year down at sea level. There was less than an inch, but it was enough to make the ground look white. Temperatures warmed throughout the day and by this evening it was raining, heavy at times. This morning there were still periodic showers (a wintry mix special), but shortly after noon there was a clear spell that last until right around 2. Fortunately/unfortunately I was outside during this time, and it made for nice ultimate (frisbee) playing conditions, but I didn’t get to take a picture of the scenic surrounding mountains with fairly heavy snow on the trees down to about 1000 feet. By the time things wrapped up at Moller field, heavy clouds had moved back over and the rain had started to fall.

Though I’ve not spent much time outside the past couple of days, I have managed to make some progress on processing photos from this year. I’m all caught up with the Q4 (Oct-Dec) – it helps not to be taking so many pictures. I’m now down to just a couple of days from Q1 (Jan-Mar). Among the days I’ve recently uploaded photos for is 16 February when I took quite a few pictures on a walk around Totem Park, including the one I’ve included with this post. Other posts (either created or with additional photos added) a January hike up Herring Cove Trail, a February outing to Medvejie Lake, a March low tide at Sage Beach, the Raptor Center trail after an Eagle release, and a sunny day at Magic Island.

Quite a few of those days had pictures that will inspire individual posts, so expect to see more (though I can’t say when, for sure).

One thing that’s kind of interesting about this exercise is finding out how much (or how little) I remember of the days in question. I usually can recall the context (location, at least) for the photos I took, but I don’t necessarily remember much other than the photos and the context in which I took them. I suppose there are other aspects that I could remember, but I just don’t have those memories firmly associated with that particular day. (For example, on the February walk around Totem Park, I also was out at John Brown’s Beach – I can also remember walking around Japonski Island one day last winter, but I do not recall if it was on the same day as the walk to John Brown’s Beach. If it was, I did not take any pictures from that part of the outing.)

I’ve heard some people choose not to take pictures because they have a tendency to become the memory. I can see a a certain ridiculousness in the practice of walking through a museum (or nature) and just snapping pictures with a cell phone, focusing primarily on it rather than fully experiencing the actual embodied presence that the camera only captures a small part of. However, in many ways, for me, the question is not whether the photo becomes the memory, but whether I can really recall the memory at all without a photo or some other form of documentation. Again, it’s probably not so much that memories are absolutely irretrievable, but that without any hook or thread to help me connect with them, they are not accessible to me without some essentially random trigger. If I’ve taken photos, I have a link that helps me (re)connect with the experiences. However, I’ve noticed that even this can be inconsistent in its effectiveness.

The less time and care I spend with a photo at the time its taken and/or in the hours and days when I can still remember a great deal of the context clearly, the less effective that photo will be in triggering the richer memories. There are times when I just notice something in passing, have a mild amount of curiosity and snap a couple of shots before moving on. If I do not end up processing those photos (and adding some text context in the form of tags, titles, captions, etc.) within a few days after taking such photos, it becomes increasingly unlikely that I will remember anything other than the immediate context of the photo. When that starts to happen, I’m usually able to jog my memory by looking at the data I record with CyberTracker (mostly bird and flowering plant observations). However there has been at least one time I could not even remember for sure where the photo was taken, nor could I determine from my observation data.

On the other end of the spectrum, those days where I take photos with more deliberation, process them relatively quickly, and write a blog post about the outing, I find my memories will tend to be much fuller. Of course those memories are shaped in large part by what I chose to document, not just because that is what I continue to have access to, but also because those are the things that were meaningful enough to me at the time to make the effort to document more fully, thereby reinforcing those memories. I feel like I have access to a broader swath of the context of those experience, even beyond what I’ve specifically photographed or written about.

I’m grateful to have the tools of digital photography and journaling via weblog. I think it’s unlikely I would have connected as fully or learned nearly as much about this place I call home without them. I’m grateful also to you who read this – I don’t know who all reads these things (other than my family), but I do appreciate the many ways and times people have offered encouragement over the 15+ years I’ve been doing this. If any of you read to the end of this (much wordier than I expected going into it) post, I would be curious to find out how long you’ve been following me online nature journaling if you wouldn’t mind leaving me a comment. Thanks!