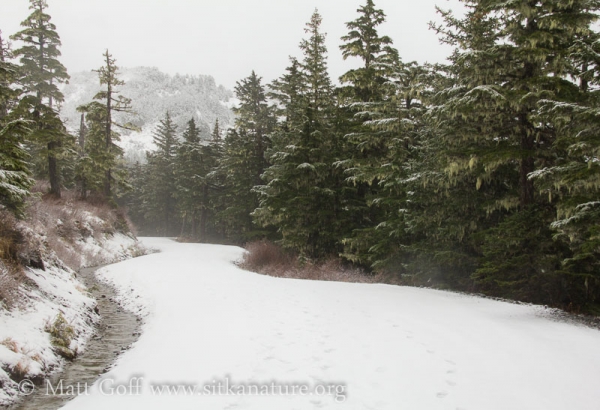 I had hoped to get the ibuttons on Harbor Mountain changed before the third gate closed, and even had tentative plans to do so back on the first weekend of the month (the gate had originally be scheduled to close on 3 November). However, when the snow level dropped low enough to start hitting the upper part of the road on Friday or Saturday, they closed it a couple of days earlier.

After missing the gate closure, I was less inspired to get up there right away, and with warm temperatures keeping snow levels up, there wasn’t really a pressing need, as they just needed to be swapped out before the snow got too deep. With snow levels dropping again this weekend, it seemed like a good time to make the ~2 mile walk up. Despite somewhat dismal weather, a friend and I drove up to the third gate and began the hike. I was a little surprised to see several other people on foot at various points (above and below the gate), some jogging, others walking. I would have guessed that with the cold wet weather, not many people would be out. It seems likely that Harbor Mountain road (which I don’t really enjoy walking on that much) might be more popular than I realized.

At the third gate, snow was mixing with the rain, and as we gained elevation, a higher percentage of the precipitation fell in solid form. Fortunately there was an inch or less of accumulation, so it was really no hindrance for us. We were able to get the ibuttons swapped out and make it back down in a couple of hours, leaving time for a stop by Starrigavan before noon. Out there I was interested to see a Red-throated Loon close to shore. Unfortunately it moved farther out before I could get my camera out for a photo, but it was nice to see. 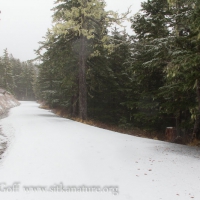 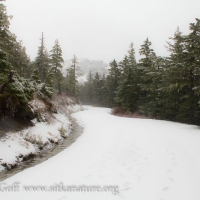 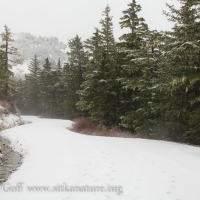 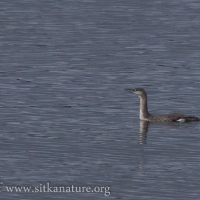