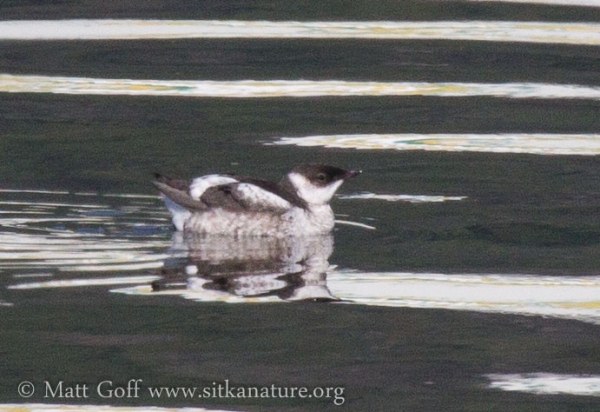 Back in January got an e-mail from Jim N., who was planning to visit Sitka on a cruise ship in August and wanted to do some birding. Other than some very regular routines, I hardly know my schedule beyond the length of time a pen’s ink will remain visible on the back of my hand, so I suggested he e-mail me later in the summer, though I anticipated I would be able to help out. The day of his visit was today, and though I couldn’t spend the whole time with him, I was able to get out for much of the time he was in town.

The weather was like something out of Southern California (where Jim is from), though probably more like a winter day down there, it was one of the warmest days this summer. We started by walking the sea walk and then down to Totem Park. Highlights included Red Crossbills down low in the Mountain Ash trees along Crescent Harbor, and a pair of Song Sparrows acting territorial along the trail where it passes by Sage Rock. As we approached the area, I heard the Song Sparrow singing and thought it might be a young bird practicing, but then I noticed at least one additional bird singing in a way that sounded like they were doing some dueling. I was a little surprised at that, and even more so when they chased each other around culminating in a fairly intense scuffle on the boardwalk. I wasn’t able to get my camera out before they were done, but it was interesting to see. I didn’t give it too much thought at the time, but now I wonder if perhaps the wintering birds are starting to return and stake out their winter territory.

I didn’t spend too much time at the park, as I needed to get back home in time for today’s call. While I was there, I saw a few shorebirds, bunches of gulls, and some other small forest song birds.

Today’s call question was about awareness of bird language and how that awareness practice helps us connect with nature, others, and ourselves. There was a very interesting share this morning that reminded how paying attention to the birds can give us insight into the energy we bring to the world, and that awareness can help us move more carefully and effectively, not just in nature, but also as we interact with each other. Even further, we can start to recognize when others are moving without such awareness, in part by recognizing in ourselves similar reactions that we might have seen in the birds as they reacted to us. The conversation went on from there, offering some interesting and helpful things to think about and work on.

Jim and I met up again for a trip out to Starrigavan. We were able to walk the Estuary Life and Forest and Muskeg Trails as a big loop. It was fairly quiet out there this afternoon, but we did get decent looks at chickadees, a juvenile heron (maybe one from the nest?), juvenile sapsucker and Lincoln’s Sparrow.

In the time that remained after Starrigavan before he needed to catch the last tender out to the cruise ship, we took a trip over the bridge and checked out the channel. There was the usual assortment of (mostly Glaucous-winged) gulls, but the surprise of the day was a juvenile Marbled Murrelet resting further up the channel. I don’t remember if I’ve ever seen one (that I knew of at the time) before. For the few minutes we watched it, it never dove. I’m not sure if parents feed their young on the water – but I was kind of thinking they didn’t. I guess I have some more research to do.

In the end it was a nice day to get out and do some birding. Thanks to Jim for his interest and enthusiasm. It’s always fun to go out with someone who has fresh eyes for the birds that are so common here that they can become easy to take a little bit for granted.