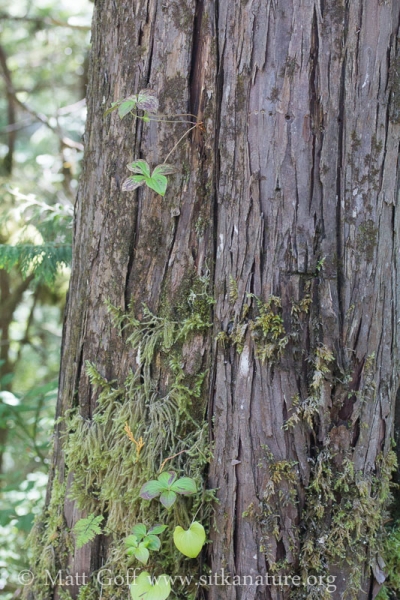 What caught my eye initially was the ground dogwood (Cornus sp) growing out of a crack in the park of a yellow cedar (Chamaecyparis nootkatensis). Given that ground dogwoods produce berries, it seemed an unlikely place for a seed to find itself. I suppose it’s possible that a bird or perhaps a squirrel ate berries deposited them up in the tree and one of the seeds subsequently washed down the trunk. I think it’s somewhat more likely that a rhizome grew up under the bark and the plant emerged from it. It would be easy enough to check for this, though I didn’t at the time. 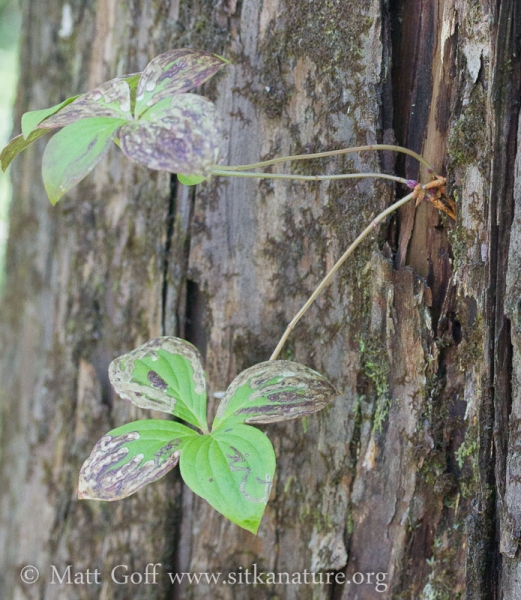 What I noticed only upon inspection of the pictures was the leaf damage on the ground dogwood was due to leaf mining activity. Over the past couple of years I’ve tried to pay more attention to leaf mines and hopefully catch them early enough to be able to capture and raise up whatever is making them. From the looks of the photos, the maker probably had already vacated the leaf, but it would have been good to check. I did notice the leaves were turning dark, so I’m not sure why I didn’t catch the fact that it was due to mining.