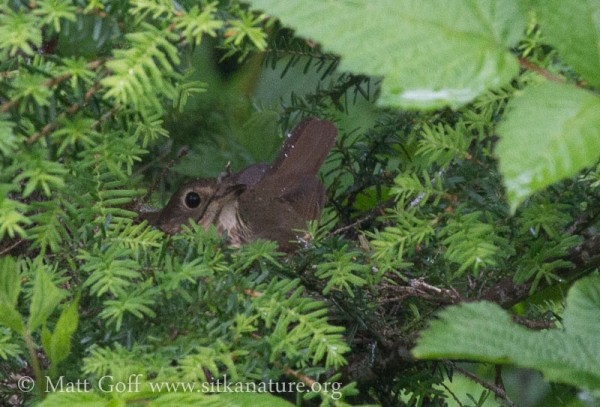 There was some wind and heavy rain this morning, but things settled down later in the day. I spent some time playing frisbee early this afternoon, and at Moller Park there was only an intermittent light wind out of the southeast with light rain falling occasionally but not often.

After frisbee was a trip to Starrigavan to check on a reported Great Blue Heron nest. I was able to see it and get some pictures, but will save the details for a subsequent post.

Near the viewing platform there was a loose flock of mostly young Ruby-crowned Kinglets begging, plus one harried adult trying to keep them fed. I noticed one with just a few feet of me, but before I could get my camera out, it flew to a branch further away (it’s the one pictured below). I suspect the flock was a single family, but I’m not sure.

Also on the trip I got some pictures of the Swainson’s Thrush nest I had previously spotted. I’m not sure if the eggs have hatched, but I’m guessing not, since there was still an adult sitting.

I picked up a couple of moths out on the porch this morning. One was a dark noctuid – I’m not sure how many species there are, but I think at least a couple. I have had trouble figuring out an id for them, though. There was also a small moth that liked to put its nose down and wings up while resting. Unfortunately it got away before I was able to get very good photos of it. From what I did get, I think it might be an Argyresthia or something similar. 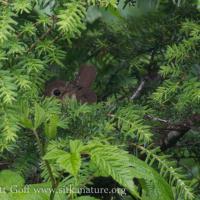 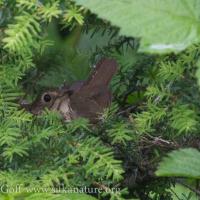 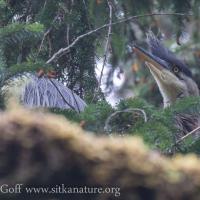 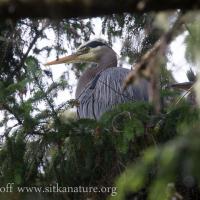 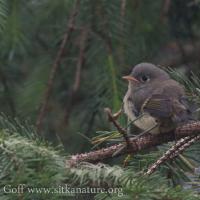