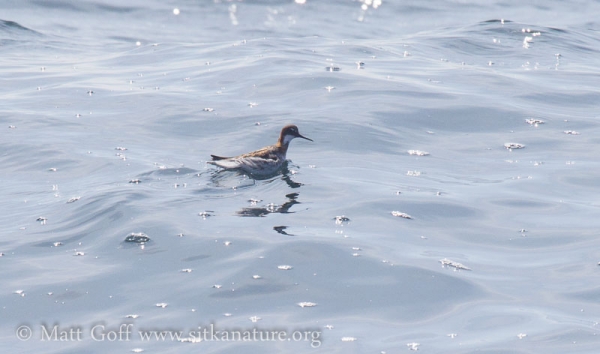 Over the past few years, I’ve tried to get out on the water regularly in the spring to check on migrant birds. Usually this has resulted in at least 3 or 4 trips out into the sound. Starting in 2010, I’ve kept pretty consistent track of what I observe with an app on my phone, so I have a fair degree of confidence when I say that I haven’t seen any Red-necked Phalaropes in the spring until this year. Nor have I heard reports of them previously that I recall.

This year was different, however. A couple of different people (on different trips) reported seeing hundreds of them in the north part of the sound. I did not see quite so many myself, but on three different trips out, I did see some (including the one in the photograph above). Looking at the occurrence of Red-necked Phalarope across Southeast Alaska, I see they are considered Common in Ketchikan, Glacier Bay, and Yakutat during the spring. Uncommon in Juneau but Rare in upper Lynn Canal. For Sitka, I indicated they are Rare based on Webster, who noted only a single spring report from the area (and prior to this year I hadn’t heard of any others). This might suggest there are many spring migrants moving north along inside waters, then heading further west toward the outer coast somewhere between Glacier Bay and Sitka. Perhaps Peril Straight across Chichagof, or maybe they go up and around Chichagof as well.