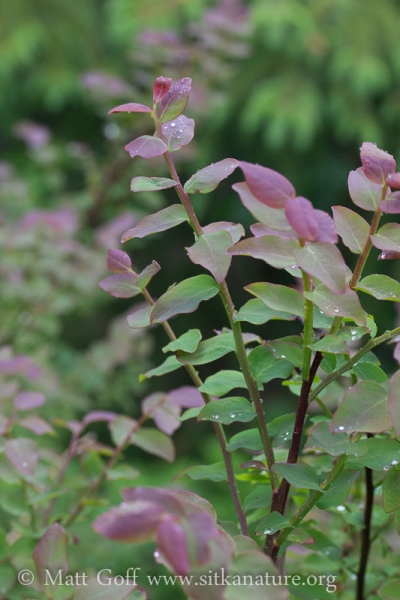 I checked in on the extra red red huckleberry I previously posted on while walking at the park today. I was interested to see the leaves were still somewhat red, though mostly they were green, as was the new stem growth. This suggests to me that it’s more likely the reddening occurs sometime other than summer, though it would be good to confirm that with continued observations. (Hopefully I remember!)

There was fairly heavy overcast this morning and periodically the rain came down fairly hard (at least for this time of year). I almost talked myself into and out of a walk to the park several times, but in the end decided I should go ahead and do it. I managed to keep it reasonably (by my standards) short, at only an hour and a half or so. I had been thinking maybe the Hudsonian Godwit was still around, but I did not see it (though there were 8 Whimbrels in front of the Visitor Center). Many ravens were calling from the trees near the end of the park. I also checked the Pacific Wren nest and it seemed fairly quiet (though I didn’t stick my face up to it, just in case the wren was tucked away in there).

I ended up walking along the river portion of the trail and coming out at the maintenance shed area. I startled a woman who works there at the Sitka Counseling, and after apologizing for her outburst she paused and asked, “Are you the guy that comes around looking at the moths?” I said that I was, and she told me about seeing a bird getting the moths off the wall. She wasn’t sure what kind it was, but definitely smaller than a robin and brown; sparrow-like, she said. I wondered if it might be a chickadee, but she said she didn’t think it had any white on it. She said the bird actually was able to grab on to the wall, and thought the bird seemed to be taking a while to eat the moth. I suggested maybe it was carrying food to nestlings. She told me she would let me know if she saw it again. I had been noticing it seemed like there were far fewer moths this year on the wall where she had seen the bird, so it seems likely the bird is the reason why. I appreciate that she thought to tell me about her observations, as it was quite interesting to me.

Early this evening I stopped by to visit Marge. She agreed that the spring migration had been (in her words) “dull” this year compared to prior years. We talked about how it seemed it went from early spring to summer in just a few days – something she said was fairly typical for where she grew up in upstate New York, but not so much here.

This evening the clouds were breaking up and a fair amount of blue sky was out. There was even a little bit of nice color on some of the lingering cumulus clouds as the sun set.