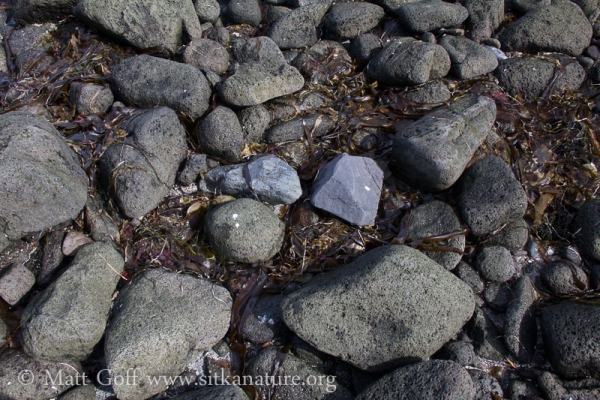 One a recent trip to Low Island, I noticed and photographed a couple of conspicuously different rocks along a part of the shore that consisted mostly of watermelon-sized basalt rocks. The two different ones appeared to be graywacke like is common along the Sitka road system (though of course I am not sure that’s where they came from). I’m not entirely sure how they got there, but one plausible scenario involves them being carried across the water in the roots of a downed tree that ultimately washed ashore on the island. Over time it decomposed (or was beat up) sufficiently to release the rocks and leave them laying there together along with all the other rocks that they don’t quite match. In addition to the difference in makeup, it seems to me the graywacke is a bit less rounded. Perhaps it’s more resistant to the smoothing done by the crashing waves, or maybe it’s not been there as long.

As is so often the case, such observations leave me with more questions than answers, but they’re the good kind of questions that lead me deeper into the exploration of this place. It’s an enjoyable experience to sit and think on these things for a spell, hold them in the back of my mind, revisit them from time to time, and occasionally maybe even get an answer.