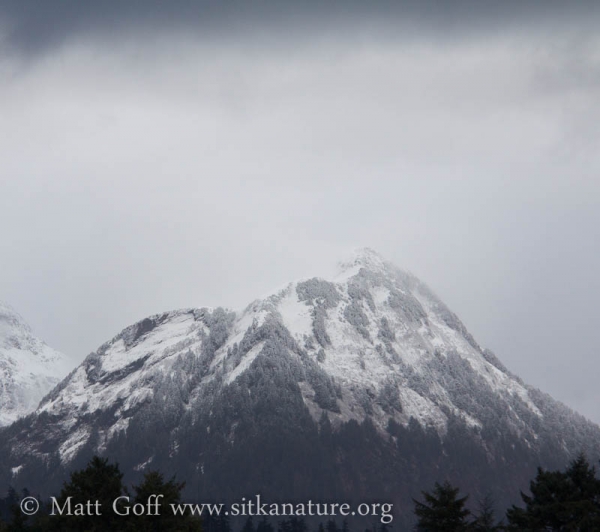 I think the interaction of mountains, clouds, snow, and light have many different moods, but some recur in such a way that they become familiar and recognizable. Last week I had that feeling of recognition which caused me to stop and take a couple of pictures as I was heading in to class over at UAS.

The fresh snow on the mountains fading with the still falling snow to the grayness of the clouds behind. With colors muted at best in the dim light, the technically green coniferous forest seems to run through shades of gray, from the dark slate gray of the lower slopes to a lighter ashy color where a thin layer of snow rests on the branches. A thicker layer of clouds overhead makes a darker band to match the darkness of the snow-free trees at lower elevations, providing a frame for the relative brightness of the snowy reaches.

This is one of the darker winter moods in Sitka. It’s not the darkest, I would say that distinction goes to those days of exceptionally heavy, mountain obscuring overcast where, especially in December and January, the low elevation sun can push so little light through the clouds that the ‘day’ is not much more than an extended gloomy dusk. Rather, this mood is the one where the clouds are a bit thinner, or the sun is a bit higher, the snow visible on the mountains lends a little more brightness, but there is still a sense of chilling dampness.

Sometimes it’s not clear why a relatively common occurrence resonates in a particular way, but I think in this instance it was because it’s getting late in the year for this mood to show up. Indeed, as the sun rose higher later in the morning, the mood largely dissipated. Unless there is another last glimpse some morning, It will probably be November before I see it again.

I suspect there are many other moods I recognize, but for whatever reason I just haven’t usually thought about in those terms. I’ll try to pay more attention going forward and see what I notice. I’m also curious what moods others recognize. Feel free to share in the comments. 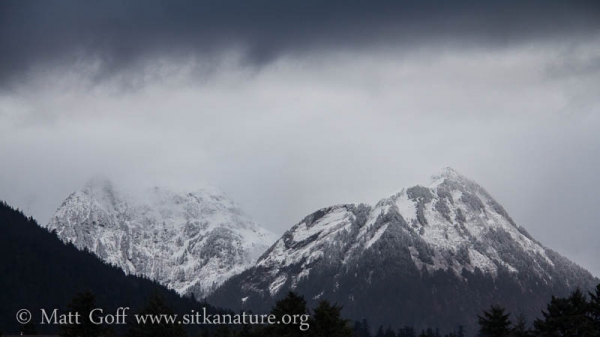