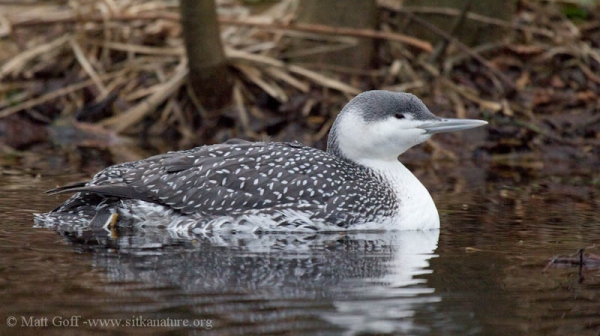 Update (4 Feb): The loon was still alive and in the same place as of 9am this morning, but was dead by 10am. Jen C. picked it up at that time – she said that upon examination they discovered it was thin but without any obvious other problems – so it may have a parasite and/or infection of some sort

This afternoon I heard from Jen C. that she had received a call about a possible injured odd looking bird at Swan Lake down by the roundabout. She found a Red-throated Loon there in the small section of open water just up from the outflow. She said it first seemed to be on the grass resting but it subsequently slipped into the water and did start an attempt to take off, but didn’t get airborne). When I had a chance to stop by a little while later, the loon was on the water, seeming mostly inclined to rest (though it did keep a watchful eye on what was going on). I only had a few minutes, so I just took a few pictures before heading off, but would have been nice to have had more time to sit and watch it.

The person who reported it had apparently also said that it was limping on land. The feet of loons are well back on the body, and as adults they can’t really walk, though they can push themselves along, so perhaps this is what had been observed. The Birds of North America On-line account of Red-throated Loon indicates they need 15m-45m to gain enough speed for lift-off, and I’m pretty sure there’s not that much open water, in which case it would be trapped there. I’m not sure how deep the water is in the outflow, but I don’t think it’s more then a handful of feet. I suspect there are few, if any, fish for it to catch there at this point, though I also don’t know if it’s even trying (if it is still there tomorrow, I would like to spend a bit more time watching it). The forecast is for temperatures to stay in the 30s over the next couple of days at least, so I don’t think the lake will be opening up any time soon. This being the case, I would guess the bird will starve without intervention (whether that be human or a dog or otter). Jen hopes to be able to capture the bird to take it to the raptor center where it can get checked out (and released back on the ocean if it seems to be healthy).

My guess is the bird came in sometime last night or earlier today during the high winds (and I wonder if it had something to do with the wind), landed in the open water, and subsequently found itself with not enough room to take off. (In some locations it’s not unusual for loons to become stranded on highways where they landed, apparently thinking the wet road was a body of water.) Perhaps if it’s caught we’ll learn a little more about it, but regardless I was grateful for the chance to observe this striking bird at a much closer distance than typical. 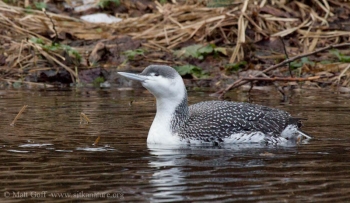 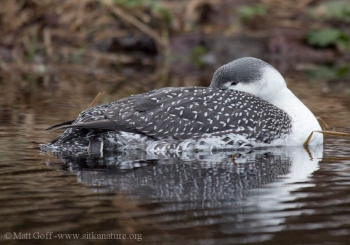