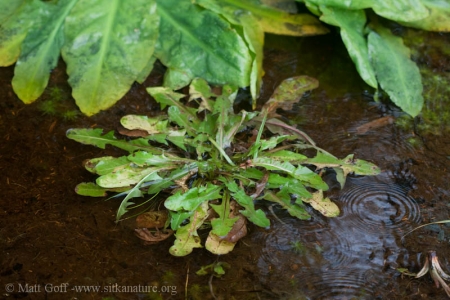 On an wet August hike up Indian River valley, I found this dandelion (Taraxacum officinale) looking quite robust in a pool of standing water.

Dandelion is an introduced species and considered fairly invasive. It’s the only introduced species I’ve noticed occurring with any regularity in locations that haven’t been directly impacted by humans (and usually on an on-going basis). That said, it seems to play nicely with other species in most places I’ve seen it that weren’t frequently impacted by human activity (including trampling). The one exception might sandy beach meadows, where it seems to compete pretty well without any help from people knocking back the native plants.

In any case, I’ve gotten used to noticing dandelions while out and about along river gravel bars, rocky coastlines above the splash zone, and of course the sandy beach meadows. However, I was surprised to find this one – in part because it was in a location I passed by at least once a year in recent years, and from the size of it, I suspect it had been growing for more than a year. It is also the first one I’ve ever found in a poorly drained location. It’s not everyday you see skunk cabbage and dandelions growing side-by-side.

I don’t think there’s always quite so much standing water – and perhaps it was during an dry spell the dandelion seed landed and got started in moist, but not overly wet, mud. It was growing in a location that gets some traffic from a reasonably well-used trail, so there the peat gets churned up from time to time. My guess is it’s hard for dandelions to get started in super wet conditions, but apparently they can survive them after they’ve grown up a bit? I’ll try to remember to check on it next summer to see how it’s doing (assuming a passing hiker doesn’t pull it out since it’s considered invasive). 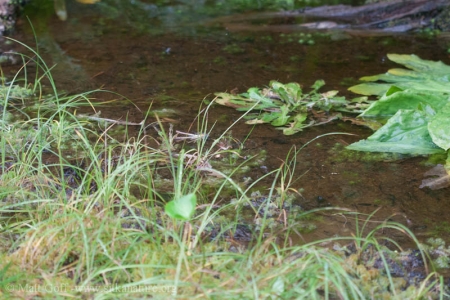