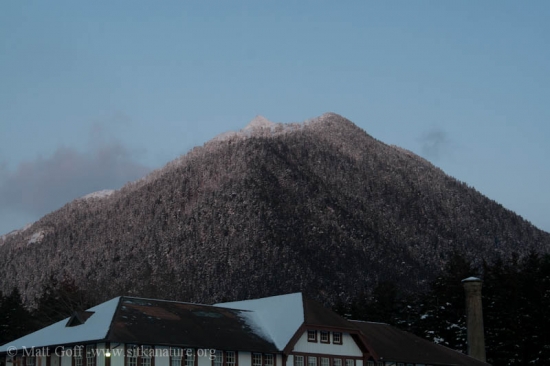 My time outside today consisted of a couple of walks to the house to do some work moving stuff out of the (soon to be former) garage in preparation for its remodel into living area.

Air temperatures were in the low 20s (after dipping into the teens overnight – quite chilly by Sitka standards), but today still would have been an excellent day to find a spot with a nice southern exposure and protection from the wind. Although the sun was feeling quite warm, the Northeast wind drove the chilled air through layers of clothes and rapidly ripped away very ounce of warmth the sun provided and then some. I’m pretty sure today was the coldest so far this winter, if not in actual temperature, than in perceived temperature.

Despite (or perhaps because of) the cold temperatures, the birds were fairly active. I saw and heard the usual winter song birds. Of particular note was an interesting tussle I saw between 3 Ravens around 4 this afternoon. There was a single raven with fluffed up feathers on the ground in the Hames Center parking lot cawing loudly. Given what I saw, I’m not sure if the fluffed feathers were for protection from the wind driven cold, or an aggressive stance toward the two ravens approaching from above. I’m not sure if they had circled around before, but two ravens came in from the west on a final approach toward the raven on ground. Both were cawing, and when they got close they started swiping at the first raven with beaks and feet. The first raven was driven back a bit, it almost seemed to be flipped over on its back, though perhaps it did that to enable a defense with its feet. After only a moment or two, the first raven scooted out from the (apparent) attack by the other two ravens and put a little distance between itself and the other two ravens. I had the impression that except for a few final caws, the encounter was basically over at that point – the pair of ravens had made their point, and the other one would no longer do whatever it was doing to draw the attention of the two. I’m curious as to what led up to the interaction that I saw – perhaps it was a one-time thing, or maybe there’s been a long-running set of interactions between these individuals.