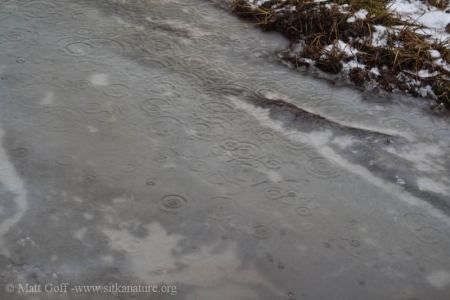 Temperatures warmed up again today and topped out in the mid-40s. The rain never seemed particularly heavy, but it was pretty much non-stop through daylight hours. The kids and I braved it to visit the house for a little bit this afternoon. Much of the snow that fell late last week has now melted off, though plenty of icy spots remained in locations where there had been enough traffic to compact the snow, but not enough to wear it off. Winds were calm.

Bird activity was fairly minimal when I was outside, though I imagine that was more poor timing than an overall lack of birds.