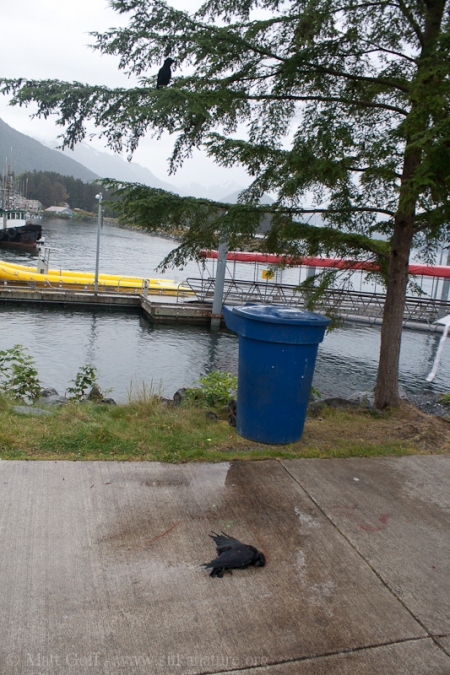 While along Crescent Harbor with Connor and Rowan recently, I noticed a few crows calling and flying across from Lincoln Street (near the Baranof Intersection) toward the Centennial Building. I didn’t think much of it at the time, but as we rounded the corner and headed toward the shelter, I became aware of a group of crows calling in a hemlock tree beside the sidewalk where the ramp comes up from the lightering float. I have noticed crows mobbing raptors in the past (though generally in flight), and I though perhaps something was there. However, as we approached, I noticed something lying on the ground – a dead crow.

I’ve heard of raven or crow “funerals” before – usually described as a group of actively calling birds gathered near a dead individual. (I even recall one story where someone said they observed living birds pulling one that had been killed by a car off to the side of the road but not eating it.) Of course it’s hard to say what’s really going on in the minds of the birds, but it is also easy to imagine that they are mourning the premature passing of a friend or relative.

As we approached the dead crow, the most of the birds in the tree flew off toward the boats in the harbor. Finally, there was just one bird on one of the lower branches looking down on the lifeless bird (see picture at top of post). There were some streaks of blood on the sidewalk, but we saw no obvious open wound when Connor turned it over to look. My best guess is the bird was struck by a vehicle, was able to flutter to the sidewalk, but suffered massive internal injuries that resulted in it dying relatively quickly. I think the blood probably came out of its mouth and I wonder if it struggled to walk around a little bit in its last moments, or if other crows drug it around a bit, perhaps trying to revive it (though the latter seems less likely, since it didn’t appear that the crows were inclined to get right next to it).

After a few moments of observation and reflection, we continued on our way. After we had gone a short distance, I noticed crows were flying back. They were cawing as they came, and it seemed that some were coming from a fair distance. Most landed in the tree above the sidewalk (see photo below), but a couple landed near the deceased and approached within a few feet – though they did seem wary in doing so. We did not have time to stay long, so I am not sure how long they stayed – but a couple of hours later on our return home, the dead crow was still in the same place, but there were no others around. 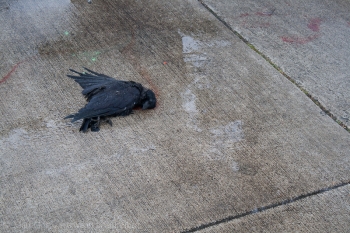 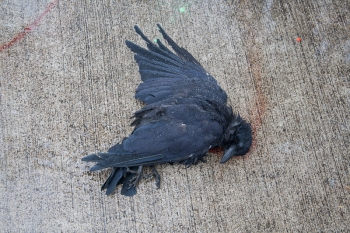 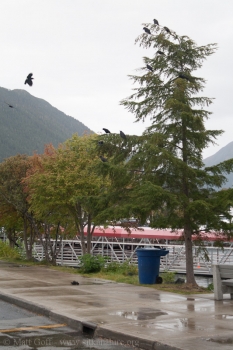