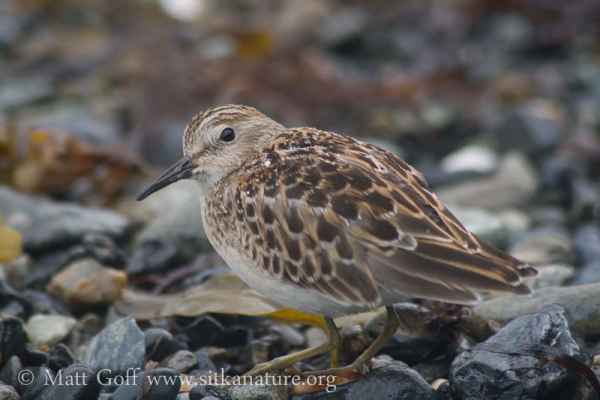 Connor, Rowan and I took a walk around the park this evening not too long after high tide. Connor and Rowan had taken the path through the woods to skip ahead of me while I completed the circuit aound the shoreline from the river mouth to the Visitor’s Center.

I was walking past the first opening to the trail (as you come from the Visitor’s Center), perhaps a little lost in thought and paying more attention to what Connor and Rowan were doing down the beach than to what was in front of me. I’m not sure why I had more or less decided there wouldn’t be much else to see, though it seems that is what had happened. The sudden movement on the beach in front of me jerked my attention back to where I was, and I saw a 5 Least Sandpipers that had been moved to action by my approach.

The birds had all been in the seaweed piled up at the high tide line, but two of them had flown a dozen feet or so down from there. Initially I paid more attention to the birds still in the seaweed, and while I did, the other two settled down and stopped moving. It’s always interesting to me how easily a shorebird, especially one as small as a Least Sandpiper, can seem to disappear just by standing still. In this case, I brought my attention back toward locating the two that were down on the fine gravel and sparsely strewn seaweed.

I took a couple of steps toward where I knew they were before I was able to spot them. Just as I did, they flushed and before they could get more than a couple of inches off the ground, one of them was plucked out of the air by a diving raptor. I was close enough to hear clearly the sharp whoosh of air over feathers, as the small raptor grabbed for the sandpiper and abruptly changed course to avoid crashing into the beach. It was all so sudden and close that it startled me a bit; it felt almost like my heart skipped a beat. I watched as the bird quickly flew down the shoreline toward the Visitor’s Center where I lost sight of it after it looped behind some trees. I did not see the bird well, but based on the size and shape, I’m reasonably confident it was a Merlin. (Falcon-like wings, but seeming too small for a Peregrine, and too dark and large for a Kestrel.)

I suspect the Merlin had been waiting in the trees and then took advantage of the distraction I created and went after the sandpipers. In hindsight, the two may have been flushing because of the predator rather than me, but if so, they were a bit too slow (or one of them was, anyway).

As I continued my walk down the beach, I came upon two additional Least Sandpipers that seemed very disinclined to move. It’s been my experience in the past that Least Sandpipers will allow for a fairly close approach with some patience, but I basically walked right up to these, not really noticing them until they took a few steps. When I realized they were not going to move unless I really forced the issue, I decided to use the opportunity to take some pictures.

I was able to get within about 6 feet of the bird pictured here, and that was with only minimal effort at being slow/stealthy on my part. Although it was 20 or 30 yards down the shoreline, I suspect the two birds were well aware of what had happened only a few minutes earlier and were being extra wary about revealing their presence to any would-be predators. As I was taking pictures of the sandpiper it was frequently tilt its head up to look towards the trees (as shown in the photo below). 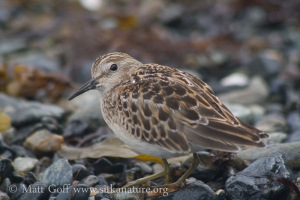