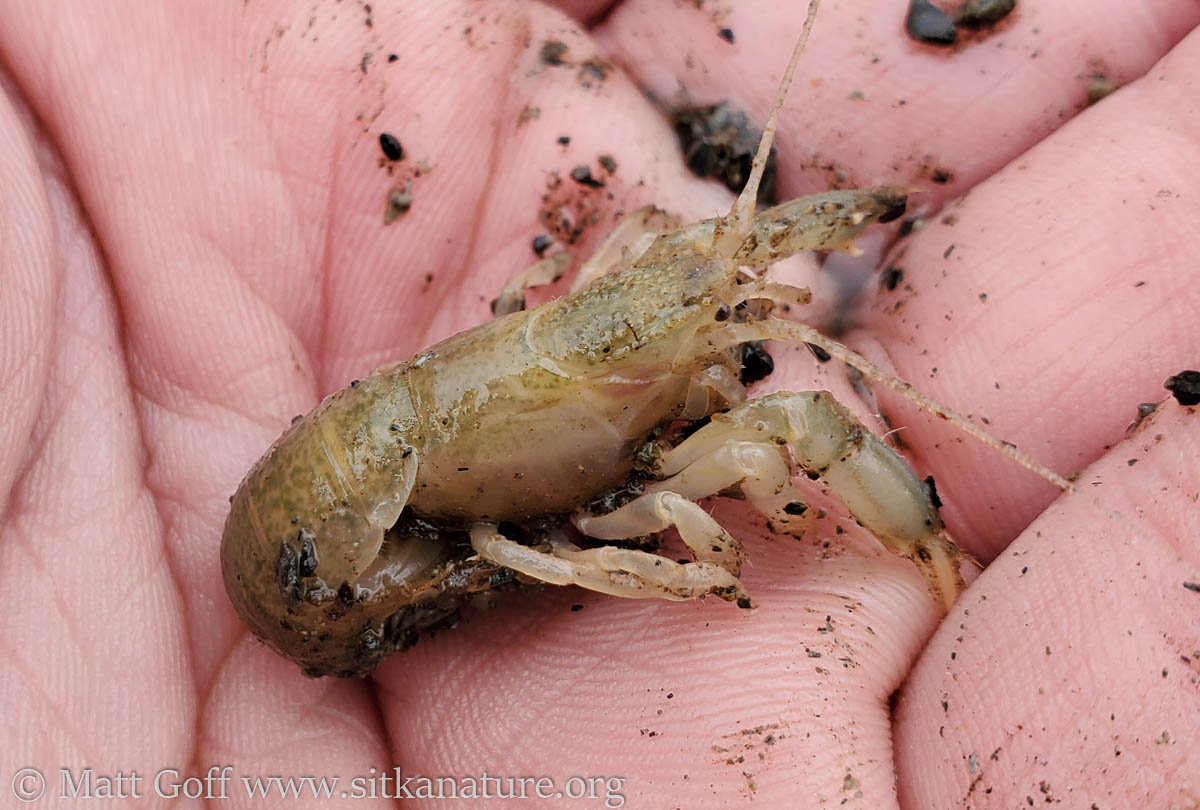 The August 29th show featured a conversation with John Chapman, a marine biologist who focuses on marine invertebrates and invasive biology. In town surveying blue mud shrimp (Upogebia pugettensis) to look for presence of an invasive parasitic isopod, Orthione griffenis. Thought to have been brought across the Pacific from Asian in ballast water and establishing on the West Coast in the 1980s, this species has expanded north and south. In some locations it caused the extirpation of the mud shrimp. There are concerns this could happen throughout the range of the mud shrimp, causing its extinction.

This conversation was recorded in early August 2021 shortly after John and the team he was working with arrived in Sitka. At the conclusion of their time in Sitka he shared this update:

We are a group researchers from University of Colorado, Boulder and Oregon State University conducting surveys in the areas surrounding Ketchikan, Sitka and Juneau for Orthione griffenis, a bopyrid isopod parasite of our native mud shrimp, Upogebia pugettensis. O. griffenis was introduced to North America from Asia in the early 1980s. They effectively castrate their hosts by sucking hemolymph. Upogebia can live at least 5 years and become reproductive at 2 years. Orthione settle under the Upogebia carapace where they can suck hemolymph from the carapace lining tissue. They only infest species of mud shrimp, and Upogebia is the only mud shrimp species in Alaska. The Upogebia carapace is transparent, allowing us to see the larger Orthione directly. Orthione seldom infest and probably cannot live in less than 2 year old, reproductive sized Upogebia. Hosts that are parasitized are effectively removed from the reproductive population. Othione can produce at least to broods of 40-80 thousand larvae. The O. griffenis invasion includes all Upogebia populations we have examined or received news of from Punta Banda, Baja California to southern Alaska.

Meghan Doran found infested U. pugettensis Settler’s Cove, Ketchikan, 6/16/2018, the first record of Orthione in Alaska (posted in iNaturalist). Megan’s O. griffenis specimen was at least 3 years old and thus, the O. griffenis invasion had expanded to Alaska at least by 2015. We (Jingchun Li, Leanne Elder, Mattias Johannson, Grace Roa, Emily Curcio, Joshua Mayo and myself) are here to collect U. pugettensis and O. griffenis and sample the sediments and overlying waters were they occur for genetic, trophic and population analyses. We have been collecting in the Ketchikan area since 5 August.

The infestation in Ketchikan is the worst I have seen in any major population in the 16 years of research on Orthione.

About 80% of the vulnerable reproductive females in the Ketchikan area are infested. They are effectively castrated. No fishery is likely to sustain an 80% take of the reproductive population. I count this as a disaster for U. pugettensis there. We have assumed they are spreading north. O. griffenis occurs in Asia at least as far north as Vladivostok, Russia. (Prince William Sound has a milder climate and is the farthest recorded northern distribution of U. pugettensis.)

Leanne Elder, Emily Curcio, Joshua Mayo and I have since sampled the Sitka National Heritage Park (with research coordinators, Olivia Magni Naomi Mason, naturalists Paul Norwood and Karen Johnson) and Starrigavan Park (with Paul Norwood and Karen Johnson). We recovered 65 Upogebia that included 13 reproductive sized individuals. One was 38.5 mm CL! We also got a double infestation (2 females but no male). However, most of the Upogebia we have recovered from the Sitka area are less than 20 mm carapace length (CL) and less than 2 years old (CL). We found infestations in less than a third of the vulnerable, reproductive size Upogebia (> 20 mm carapace length). Orthione isn’t a disaster in the Sitka area YET.

The infestations in Sitka (double infestation aside) do not look as severe as in Ketchikan. Maybe we are at the far north end of the invasion. Whether we can get a good sample of Upogebia to examine for Orthione in Juneau will partially test this possibility.

The 1+ year old shrimp (11-15 mm) U. pugettensis cohort is dominant in Sitka. None of the < 20 mm CL Sitka shrimp were infested while, in contrast, the Ketchikan samples include an infested 9 mm CL Upogebia!!! Only 4 of the 12 >20 mm Sitka Upogebia collected were infested .

Orthione live up to 4 years and appear to have a constant growth pattern. The biggest are the oldest. Since O. griffenis infest only 2 year and older U. pugettensis, shrimp hosts bearing 4 year old Orthione are probably no less than 6 years old.

The Sitka population does not seem to have the largest (4 year old) O. griffenis. It seems to be a more recent invasion.

O. griffenis will not likely decline in Alaska. This is a preprint of our paper coming out in “Aquatic Invasions” very soon. The paper covers much more than I can summarize here and cites papers that give even more information.