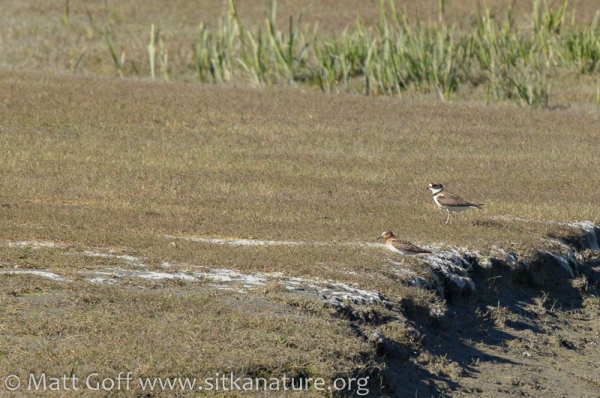 While up in Elfin Cove this past week, my field partners (Kent and Kitty) and I had a chance to get out with Steve and Debbie from Elfin Cove to visit Taylor Bay (across Cross Sound from Elfin Cove). We made kind of a big loop walking around the beach dunes and a large estuary meadow, and on the way back I ended up lagging a bit behind taking pictures of tracks and things. We had been seeing quite a few Semipalmated Plovers and Least Sandpipers (both of which seem to nest in the bay), but I noticed one sandpiper that seemed a bit different than the others when several took flight. It ended up flying over by a Semipalmated Plover, where I was able to get a better look at it.

At first I thought it might be a Sanderling, as that was the only small sandpiper I have experience with that shows quite so much red. However, it did look quite right for Sanderlings that I had seen (and it seems like they’re usually down near the water’s edge), so I began to wonder if it could be a Red-necked Stint. I have never seen a Red-necked Stint and, although I know I’ve seen pictures, it was not a species I was overly concerned about seeing, as there are only three prior reports that I am aware of (from Glacier Bay and Juneau). Given the rarity of a Red-necked Stint, and the general difficulty small shorebirds can present, I did my usual thing and took pictures so I could ask more questions later.

The bird seemed fairly cooperative, so after getting a few photos, I walked over to where everyone was waiting for me and mentioned I had seen an odd (to me) looking shorebird. It might be a Sanderling, but it might be something pretty unusual like a Red-necked Stint. They decided it was worth walking back to look (as Kitty put it, it would have been pretty annoying to have just assumed it was a Sanderling and then found out later it was a rare bird), and we were able to find it again, with everyone getting very good looks at it.

Upon getting back to Elfin Cove we reviewed the birds, and saw Sanderlings should be closer in size to a Semipalmated Plover, while this bird seemed distinctively smaller. Based on the illustrations, this bird seemed a better fit for Red-necked Stint as well.

Given the remoteness of the location, I did not figure anyone would be wanting to rush out to see the bird (even if we were correct about it being the stint), so I waited until getting back to Sitka where I could more easily share the photo and get confirmation of the id. In his email confirming our id, Steve Heinl said to note the unspotted head and neck.

Thanks to Steve and Debbie Hemenway for sharing stories and showing us around their part of the world, and thanks to Steve Heinl for confirming the identification. 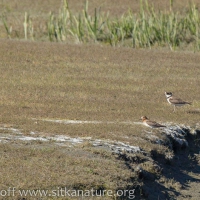 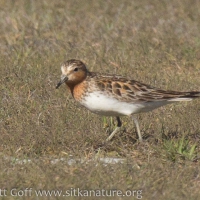 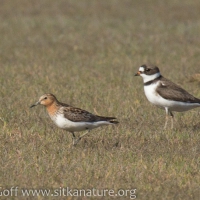 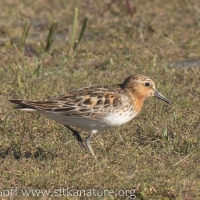 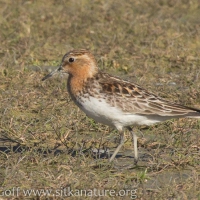 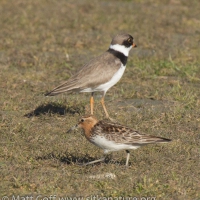 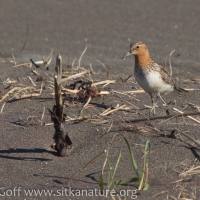 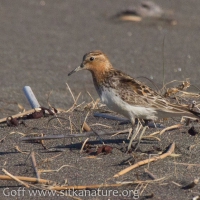 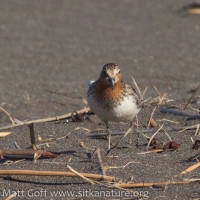 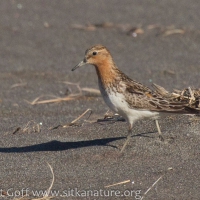 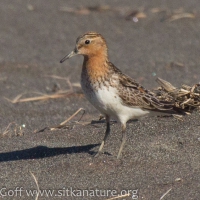 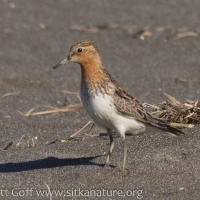