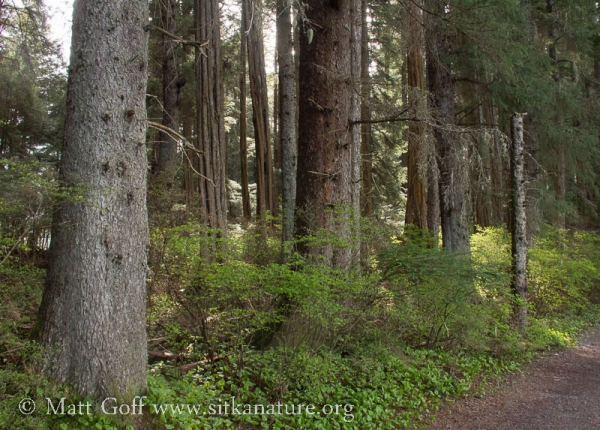 Yesterday evening’s clearing skies carried over into this morning. Although the sun is now rising around 5:30am, there was still frost on the ground in places shaded from the sun’s direct light when I first ventured out around 8am. There was a breeze coming from what seemed to be the east or maybe east southeast (with the varied terrain, it’s sometimes hard to tell where exactly the wind comes from, I think it wraps around a bit). Regardless of direction, it felt quite chilly. On my walk around the park, I spent some time walking out to the end of the flats by the river mouth, and the wind was cold enough to make my fingers go numb despite the sun. As the day went on, clouds moved over and the latter half of the day was straight overcast.

There were hundreds of Surfbirds down near the river mouth this morning, also a good number of Black Turnstones, and a few Rock Sandpipers and Dunlin. I also saw a lone Western Sandpiper, my first of the year. I did not see the flock of Marbled Godwits that Connor reported yesterday. On my way home, I thought I heard and might have seen a Tree Swallow, but I was not confident. Connor told me he saw one fly by our house this morning, then saw another one down at the park later today. While Rowan was sitting outside she, noticed the female Anna’s Hummingbird visiting under the porch. She wondered if maybe it was picking up spider webs to build a nest.

Someone commented to me today that it seems like there’s never enough time to just sit and watch everything that’s going on. That’s a feeling that’s easy for me to have, especially this time of year. Looking back at prior years, I know that there have been other years when I didn’t get out as much as I am this year, but there have also been more recent years when i have gotten out more. This year the big impediment I’m feeling is the desire to really pare down my old photo backlog. I’m making good progress and (re)discovering some interesting stuff, but it does take away from outside time, unfortunately. I am appreciative of those others who are getting out and sharing their observations, it’s great to keep track of what’s going on, even if it’s a little more vicarious than I might prefer in some respects.