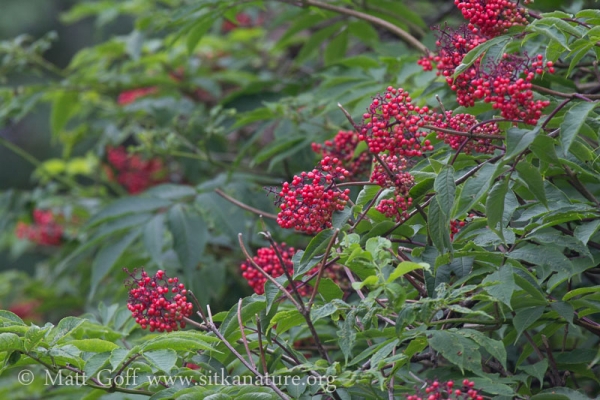 We drove out the road today to check on the Swainson’s Thrush nest, but couldn’t see any birds using the nest. There were however many birds active in the brushy area adjacent to the road. Several thrushes were utilizing the ripe elderberries that were abundant on one large bush. In addition there were other smaller song birds such as juncos, chickadees, and warblers foraging in both the brush as well as the taller trees behind.

After spending a little time looking along the road, we went to the south beach of Halibut Point Rec to catch what was left of low tide. There were some interesting things going on there, most of which I’ll post about on their own separately. Highlights included Marbled Murrelets close to shore, ripe trailing currants (Ribes laxiflorum), and various intertidal creatures. There were a couple of kids (accompanied an adult) fishing for rock fish.