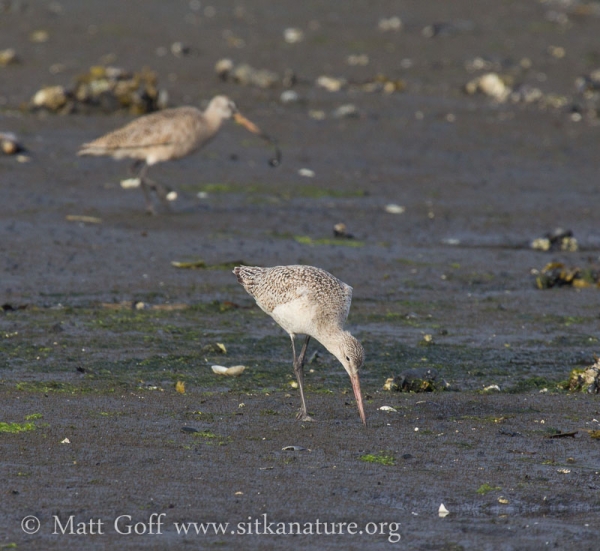 I got up relatively early (at least compared to my recent rise times) and biked over to the Turnaround in hopes of seeing the godwits that had been reported there. I got a report that one of them seemed much paler than the others, so I thought it would be interesting to check it out. When I arrived, the tide was quite a ways out, but I could not see any godwits out on the flats. I walked out toward the water, and when I had gone about halfway, the three godwits showed up. I got good looks at all of them, and indeed one was distinctly paler than the other two, but as far as I can tell, they’re all Marbled Godwits.

On my way home, I stopped by the Path of Hope. I took a seat at the top of the mini-bluff overlooking Swan Lake. The sun provided warmth as it shone through a break in the clouds. Perhaps in part due to the warming effects of the sun, I could smell the resinous odor of spruce sap that had been dropping from the wound left where a good-sized branch had been pruned off some time back. I could hear several different birds singing, and made particulra note of at least two or three different Song Sparrows trading songs from the their territories along shoreline of the Lake Street properties.

Following the visit at the Path of Hope, I spent a little time at the peninsula. There were 10 Greater White-fronted Geese still hanging around. (I had seen a Gadwall and two American Wigeons at the upper part of the lake). I was a little surprised when I checked the Song Sparrow nest and saw it appeared to be empty. A parent was still nearby, and seemed uncomfortable as I went in for a closer look. Around that time I realized a young bird was sitting on a branch above the nest. It didn’t appear to me that it was particularly close to being able to fly, so perhaps it was just taking a break from sitting in the nest.

This afternoon an order of plants (shrubs and strawberries) arrived, so I spent most of the evening working to get things planted in the yard. Although I had only planted about half of what arrived today, it seemed time to come in as it was starting to get dark. I was a little surprised to see it was already nearly 9:30. It’s easy to lose track of time during this season. 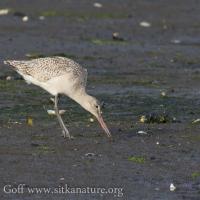 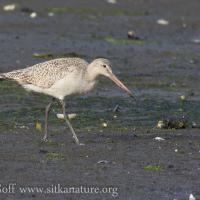 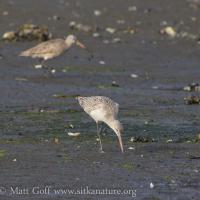 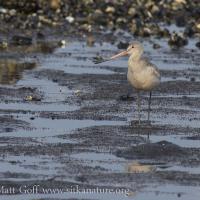 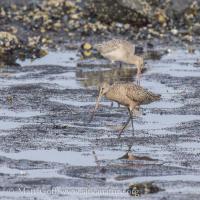 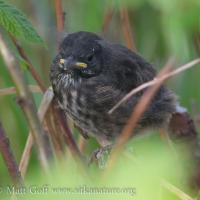 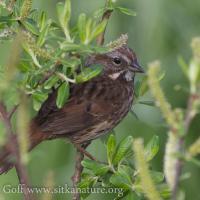 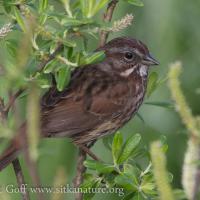 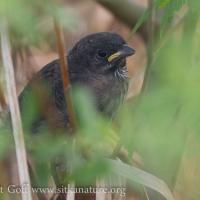