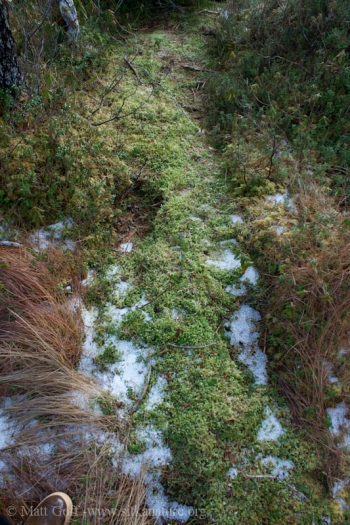 On a November hunting trip we followed a fairly long bear trail for a while. At one point along the trail we came upon a section leading up to a sign tree that stood out to me. I’ve seen several other trails where there were the worn in foot prints and noticed different vegetation at the base of the tree, but I don’t remember seeing such a distinct vegetation difference elsewhere along the trail.

In particular, I noticed there were different species of mosses and the sedges seemed to be largely absent. While I had previously figured the vegetation differences at the base of sign trees were due to the bears standing there repeatedly and moving around (as they rubbed their back against the tree or whatever else they did), I don’t think that is a good explanation for this trail. Given the distinct foot prints, I suspect most bears place their feet rather deliberately upon approach, in fact the ‘hot feet’ were even more worn in there than they had been elsewhere along the trail, which would suggest they got more consistent use. The elevation and ground of the trail didn’t seem significantly different than either side (that is, I don’t think it was better drained).

My current best guess is the difference was due to frequent urination by the bears on their approach and/or departure. Unfortunately I don’t have pictures from both directions, but my recollection is that one side had a longer portion of trail with the different vegetation than the other. I have the sense that bears probably urinate more on approach then departure (assuming they do it all, which I am not sure of either), but I don’t have a good reason why that might be the case, nor any particular evidence to support it at this point. I’ve heard of at least one person observing a bear pissing as it deliberately walked along one of those hot foot sign trails, which is what made me think of that as a possibility here. I also suspect urine would provide additional nutrients that could influence what species are most competitive.

One way to get some verification would be get a wildlife trail cam and monitor the location for a season to see what shows up. If I ever manage to do that, I’ll be sure to post a follow-up on the weblog. 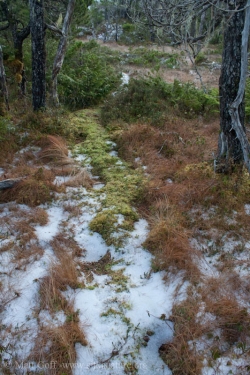 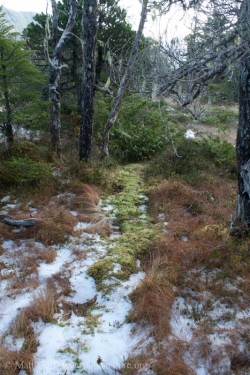