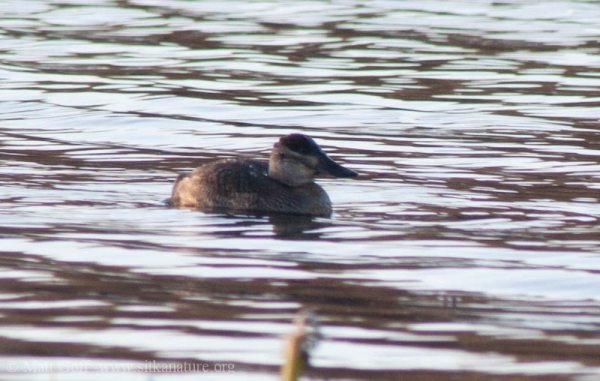 Marge Ward called me today a little after noon to let me know she thought there might be a Ruddy Duck (Oxyura jamaicensis) on Swan Lake. I was able to get over to the lake by about 1:30 and saw the usual assortment of waterfowl along with an American Coot, but no Ruddy Duck. I spent some time walking along the lake shore down toward Swan Lake park, and up just past the radio station, with some time sitting along the shore enjoying the warmth of the sun, despite the chilling effects of the cold north wind. Eventually I went back to the peninsula, which was now in shade, as the mid afternoon sun is not high enough to gt above the trees growing on the hill southwest of the lake.

Figuring this would be my last look around for the day, I walked slowly along, checking the few birds that were near the peninsula (including 2 coots I had not seen when I first arrived). I noticed an odd looking duck on the other side of the moose diving repeatedly. It appeared smaller than a nearby Ring-necked Duck, but it did not have a tail pointing up in the air like I expected from a Ruddy Duck. I was able to get a few pictures as it repeatedly dove and resurfaced, while gradually making its way around the north side of the peninsula. Shortly before my ride arrived, it had neared the vegetation along the Lake Street shore and, apparently done eating, started preening itself. As I was leaving, it settled in with a group of Mallards and appeared to be resting.

Upon arriving home and looking more closely at the pictures, I concluded the bird was probably a juvenile Ruddy Duck. An upright tail was never in evidence while I watched, but in some pictures, I could see the bird had a long tail – it was just trailing in the water. The dark cap, a dark line across its cheek (but not too dark), overall brownish color with some light barring, compact shape of the body, combined with a large-ish head and bill, all seemed to fit well with juvenile Ruddy Duck as shown in Sibley’s. It could also be an adult female, but Sibley’s shows them having greater contrast between the dark line across the cheek and the pale feathers above and below than this bird seems to have.

Ruddy Ducks have been reported on Swan Lake at least a couple of times in the past, including a few days in December 1997 as well as February 1998 (the timing of which suggests it may have been the same bird overwintering in this area). This one appears to be a juvenile, but the December 1997 bird was reported as a (presumably adult) male. 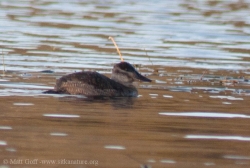 Up for a breather between dives. 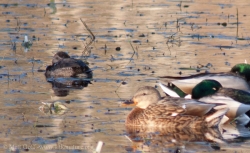