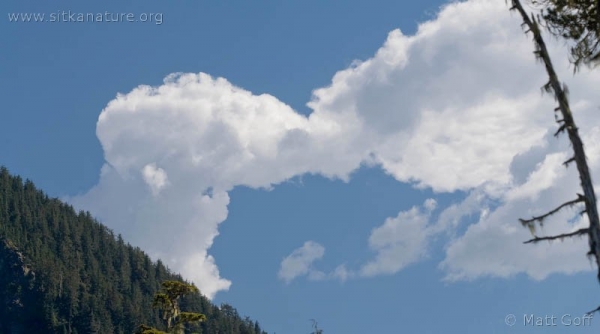 It’s been quite warm (by Sitka standards) over the past few days. Thursday’s high temperature of 75F broke the former record high for the date of 68F, set in 1990. It was slightly cooler on Friday, and the high temperature of 70F recorded at the airport did not come particularly close to breaking the record of 77F set in 1964, though several other communities (including Port Alexander on South Baranof island) did set records for the day.

The forecast for Friday called for clouds developing in the afternoon with a chance of thundershowers. I watched for cumulus clouds developing as the day went on, and although a few did, they seemed to stall out or dissipate rather quickly. The one shown in the photograph at the top of this post had mostly been blown apart (or so it seemed) within 20 minutes of the time I took the picture.