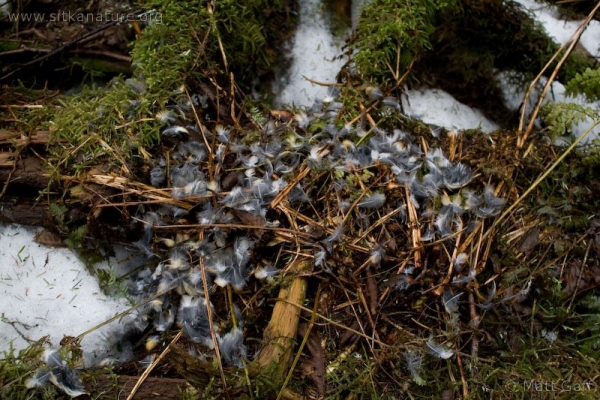 While taking a shortcut through the park yesterday, Connor and I happened upon four piles of Varied Thrush feathers like the one seen here. I could not decide how many kills the feather piles represented, but I’m pretty sure it was more than one and I wouldn’t be surprised if it was less than four. Most were dominated by body feathers, and a couple had flight feathers as well. Given the still fluffy nature of the body feathers and the fact that they were still fairly well contained despite a significant blow Friday night and Saturday, I suspect they were relatively fresh. However, I’m not absolutely sure because I do not know whether the wind would have blown through that exact area in such a way to spread the feathers, nor do I know how long body feathers stay fluffy in snow and rain.

Another question is how far apart the kills were made (assuming there were in fact more than one). The piles did have varying amounts of body feathers, but I am not sure whether that might have been due to moving during plucking, or if the wind might have blown some away on the older kills.

As for what made the kills, I am suspecting an owl, probably a Western Screech Owl, but I wouldn’t be surprised if it were a Sharp-shinned Hawk or Northern Goshawk. I’ve heard that owls will usually eat the bird whole, while hawks will leave parts such as the wings, head, and feet. I did not see any parts, so this might suggest an owl was responsible. I suppose it’s possible that a screech owl has a nest in the area and was getting food to feed its mate.