The series of entries that starts with this post was conceived after S. L. White, of Foothills Fancies, Romantic Naturalist, and other blogs, had some nice things to say about this site, with particular mention of the 1000 Species Project. Initially I was just going to leave a comment on the entry there, but I realized I had more than a comment’s-worth to say in response to some of the questions raised on the Romantic Naturalist about the nature of the naturalist endeavor. 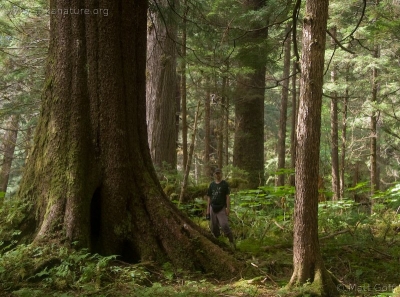 To What Do I Aspire?
This summer I had the opportunity to go on a hike with Richard Carstensen (seen in the photo above). He has spent a lot of time in the woods throughout Southeast Alaska and it was very interesting to talk with him. One of the things that came up early in the conversation was his curiousity about how I would describe my interests, especially as they relate to natural history.

I have always tended to be a curious individual with diverse interests. Over the years many things have caught my attention for at least a little while. I gradually realized that there was far more in this world that was interesting than I would ever have time to learn and that if I really wanted to have some chance at a deep understanding of something, I would need to limit my investigations in some way. In the end, I decided that my limits would be geographical. Some people get really into beetles or birds or wildflowers or rocks or clouds, I want to get into this place. I do not want to learn about all the beetles or birds or plants or rocks or clouds, but I am driven to learn about the beetles and birds and plants and rocks and clouds that can teach me about this place and those who are my neighbors here.

This place is key. I have only a passing interest in things that live elsewhere, except inasmuch as they are fairly directly related to this place. It’s even worse though, the fact is, I have very little interest (to the point of it being an active disinterest) in even leaving this place for any length of time…

At some point in my ramblings I paused to catch my breath and he asked if the following statement fit my sense of things: “…a generalist in subject matter, but a specialist in place.”

This statement is as accurate is as any I had come up with to describe my aspiriations, and it’s certainly far more concise.

2 thoughts on “On Being an Aspiring Naturalist”