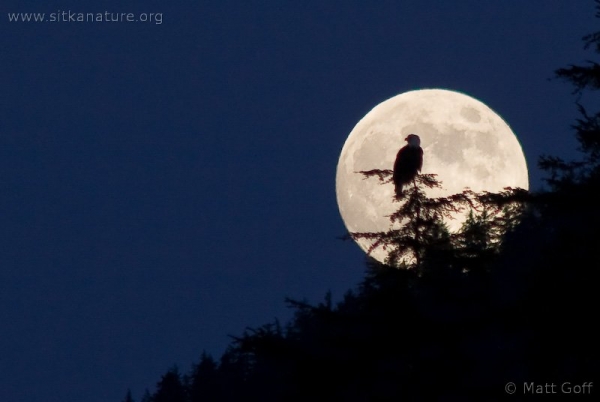 Last week Melissa came home and suggested I go take a look at the moon rising behind the mountains. I was a little reluctant, and I had been working on something and figured the moon rises fast enough, I would probably miss the most interesting part. In the end, I decided I could go out to check it out, and I was not sorry I did.

She said the place she saw it best was down near the tennis courts in the greenbelt near Crescent Harbor. It only took me a minute to get down there with my camera and was able to see the moon. The color she had described was gone, as I suspected, but it was still nice to see the moon rising along the lower slopes of Verstovia. It was not as photogenic as I might have preferred, due to powerlines and such intruding into the image. However, while I was watching, I happened to spy a Bald Eagle perched in a distant tree that was near enough in alignment to the moon that I thought I might be able to compose an image with both.

I made my way up the campus lawn and was able to get the eagle and the moon together. I was not able to line them up in quite the way I had hoped and took a lot of pictures hoping they turned out reasonably sharp with the eagle in profile (it periodically moved its head, but most of the time it was facing me, so the clear outline of its beak was not there). In the end, I kept six shots, and felt fortunate to have the opportunity to photograph this scene.

4 thoughts on “A Bald Eagle and the Moon”