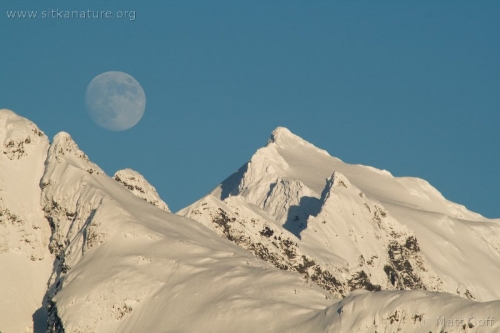 Sunday:
Connor and I walked over to the airport today to get a rental car. We then went by John Brown’s Beach around sunset.

Weather: Clear and calm for the second day in a row. Temperatures were in the upper-30s, at least where was not obscured by trees or hills.

Birds: We saw a couple of Song Sparrows on the rocks near the harbor. In O’Connell Cove there was a Great Blue Heron and a Double-crested Cormorant on the rocks. In the channel there were Barrow’s Goldeneyes, a loon, many gulls and Long-tailed Ducks, Common Mergansers, and Pelagic Cormorants. We saw some European Starlings near Sealing Cove.

At John Brown’s Beach 5 or so Pelagic Cormorants were sunning on the rocks, some Common Mergansers near the shore, and at least one Marbled Murrelet out toward Whiting Harbor.

Other Notes: The winter green seaweed was growing very high up on the rocks at John Brown’s Beach, even up on the black lichen crust zone. I’m not sure if maybe very high tides and/or splashing waves was enough to help the stuff grow, because generally I’ve seen it growing at the upper intertidal zone instead of the splash zone.

Quite a few Panellus sp mushrooms on Sitka Alder that had been cut up to make the path less brushy.

Moonrise over the mountains an hour or so before sunset was nice. I tried to catch a green flash at sunset, but didn’t have any luck. After dark, the moon glow on the mountain snow was interesting to see as well. It’s really been fairly cloudy this winter so far, so it’s been novel to have the clear skies.

Monday:
Got a ride out to Starrigavan and walked the Mosquito Cove, Forest and Muskeg, and Estuary Life trails this morning.

Weather: Clear, calm. Temperatures in the 30s (low 30s around the house). With quite a bit of ice in the harbors and on Crescent Bay, I was a little surprised to see no ice on the water out toward Starrigavan. It seems like it stays cooler out there than in town and it certainly looked very calm on the water close to shore, so I’m at a loss to explain why there was basically no ice at all in the ocean water. I guess it’s possible that there is more current and/or wave action out there, but that seems unlikely in the protected coves.

Birds: There were Ring-necked Ducks at lower part of Swan Lake. The Cackling Goose was at the penninsula. There was a male Bufflehead fighting ice near McDonalds. Quite a few Barrow’s Goldeneyes in the Cove (where the small harbor is out the road).

In the woods while hiking on Mosquito Cove trail, I saw Brown Creepers and Golden-crowned Kinglets. In Mosquito Cove there were 2 or 3 Barrow’s Goldeneyes and a Red-breasted Merganser. Out toward the mouth of Katlian Bay, I think I saw a Marbled Murrelet fly by. I also noticed Loons flying by. While sitting on a rock in the sun along Starrigavan Bay, I noticed a Common Loon, Pelagic Cormorants, quite a few Gulls way across toward Big Gavanski island. Some Loons flew from Katlian Bay toward the gulls. They seemed to want to see what was going on, but I could not tell whether they stayed (I suspect they did not, as I think the gulls were gathered to collect scraps from a sea lion rather than because there was a school of forage fish near the surface). Also out well away from the Starrigavan shore were birds that appeared to be Long-tailed Ducks and a Common Murre, but they were too far away for me to be certain.

In Starrigavan Bay I saw Buffleheads, Scaups, Mallards, and Northern Shoveler, and a Surf Scoter.

Near the first bench on the water side of Mosquito Cove trail, I saw a Song Sparrow foraging in the mosses. It did not seem too concerned about me, so I ended up getting fairly close to it as I walked by.

This evening a friend told me about hearing some geese in Aleutkina/Leesoffskaia (which was well frozen up at the head).

In the yard I saw about 10 Common Redpolls this afternoon. There were also Dark-eyed Juncos.

Other Notes: I took some pictures of a couple of Clubmosses which I believe are Huperzia miyoshiana.

There is a lot more Asplenium viride along the Mosquito Cove Trail cliffs than I had originally realized.

There was a Harbor Seal in fairly close to shore as I walked the beach toward the road after finishing Mosquito Cove Trail. It was near the high water island (and the water was high, so an island, it was).

Tuesday:
Weather: Today there was a thin overcast at about the 2300 foot level. It got heaver as the day went on. It was calm and temperatures were cool.

Birds: There was 1 Ring-necked Duck at Swan Lake, as the open water has reduced in size. There was a Cackling Goose along with the Mallards. Several gulls were around, including a first year Glaucous Gull.

At the Park Street Feeder I saw quite a few Dark-eyed Juncos and pine Siskins. There appeared to be at least 2 White-crowned Sparrows and a Golden-crowned Sparrow.

Wednesday:
Weather: It was overcast with low clouds through much of the day.

Birds: In the backyard today were quite a few juncos, I figured at least 20. In particular I noticed one very dark Slate-colored bird and the bird with pale wings. I think there were other Slate-colored birds as well. There were at least 3 Varied Thrushes and I heard and caught glimpses of Golden-crowned Kinglets in the trees.

Thursday:
Weather: Today was clear. It was calm at the house, but there was a breeze out of the north on the bridge.

Birds: There were many juncos again in the backyard, as well as a Song Sparrow, at least 4 Varied Thrushes, on Brown Creeper, and Golden-crowned Kinglet.

There were a couple of Common Mergansers in Crescent Harbor, several Barrow’s Goldeneyes at the mouth of Kettleson Cove, and 7 Pacific Loons out a little bit further than that.

In the channel I saw something close to 100 Scaups, quite a few gulls, and Common Mergansers. Near the Delongs new place I noticed 6 Buffleheads and 4 Common Mergansers, but I did not see much of anything out toward Middle Channel. Near the work float I saw a juvenile Barrow’s Goldeneye come up with whta I presume was a shore crab (Hemigrapsus sp). It took several tries to get the swallowed.

Friday:
Weather: It was a cool wet day. It rained some early, then changed to snow, but it was snow of an exceptionally wet variety. It accumulated as a two inch slush.

Birds: There were juncos and at least 4 Varied Thrushes around the house at various times today.

Saturday:
Weather: It snowed this morning, then got breezy toward the afternoon. Temperatures fell dramatically in the late afternoon and evening.

Birds: I was able to visit a house where an Anna’s Hummingbird has been coming to a feeder since late fall. I got some photos of the bird.

There were 6 Bohemian Waxwings along Etolin Street and Finn Alley, then I saw approximately 30 of them in front of Fraser on SJ campus eating the berries from the bushes there.

At the Park Street feeder I saw at least one Golden-crowned Sparrow, maybe more, and a White-crowned Sparrow along with many juncos and Pine Siskins.