Today was the Christmas Bird Count and I made my fourth trek up Verstovia and down into Indian River.

It was Christmas Bird Count day, so I hiked up Mt. Verstovia to Peak 2550, down into the bowl and finally into Indian River Valley.
Weather: Light snow was falling when I started this morning, it continued through morning, but had stopped by the time I got down into the river valley. Graupel was falling this evening. Snow was probably at least 3 feet deep out of the trees near Peak 2550 and down into the bowl. There was a thin layer of fresh powder on top of semi-consolidated snow that would not hold my weight. I was typically wading up above my knees. There was a pretty good breeze on the peak and down into the bowl, though less breezy elsewhere. 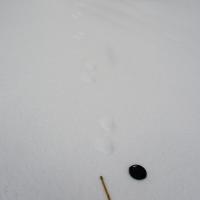 I suspect these are Marten tracks due to size and location, but I'm not positive about that. 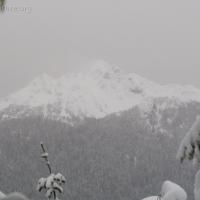 A light snow was falling as I reached the treeline on Verstovia Trail and had this view of Harbor Mountain Peaks.