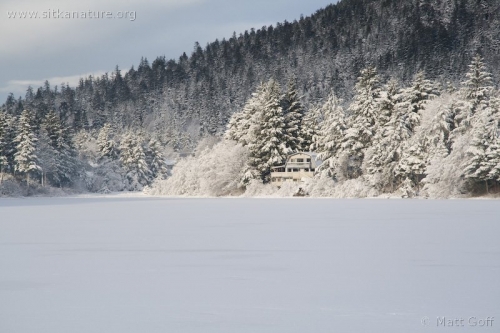 Sunday (Photos)
It was Christmas Bird Count day, so I hiked up Mt. Verstovia to Peak 2550, down into the bowl and finally into Indian River Valley.
Weather: Light snow was falling when I started this morning, it continued through morning, but had stopped by the time I got down into the river valley. Graupel was falling this evening. Snow was probably at least 3 feet deep out of the trees near Peak 2550 and down into the bowl. There was a thin layer of fresh powder on top of semi-consolidated snow that would not hold my weight. I was typically wading up above my knees. There was a pretty good breeze on the peak and down into the bowl, though less breezy elsewhere.

Monday:
I spent the day inside working except for a brief foray into the yard to put up a suet feeder.
Weather: Last night’s graupel turned to a more typical snow overnight. There was at least three inches on the ground this morning. It was partly cloudy for most of the day, with highs right around freezing and no additional accumulation. There was not really any wind around the house.
Birds: I noticed a couple of juncos eating some of the sunflower seeds Connor had left out this morning.

Tuesday: (Photos)
I wandered around a couple of residential neighborhoods a little bit on the way to pick up Rowan, including a brief stop at Swan Lake. This afternoon I took a walk around Totem Park.
Weather: Another inch or two of snow fell overnight, but skies were partly cloudy throughout the day with no additional snow. Temperatures were in the upper 20s and low 30s. Winds were light around town, but at the park this afternoon there seemed to be a bit of a breeze out of the ESE near the end of the park. Swan Lake was covered in snow, with a small opening near the inlet. I’m not sure whether there was a little open water at the sides of the lake elsewhere, but it did not look like it from the peninsula.

Birds: I was hoping to find the waxwings to try to get better pictures, but I did not have any luck. I did see a Yellow-rumped Warbler and several Robins. More than one flock of finches flew overhead during my morning outing, but I am not sure what they were, and I never got a good look1 at a flock in a tree. There were several Mallards at the lake, but I did not happen to notice the Cackling Goose.

When I arrived back home, there was at least one (maybe two) Winter Wren chirping by the neighbor’s house.

Wednesday: (Photos)
I went for a relatively short outing around town to see what birds I might be able to find.
Weather: It was sunny and calm with cool temperatures. I was thinking it might have been a good day to go winter kayaking, as the calm air with the sun reflecting off the water probably would have felt much warmer than the upper-20s air temperature might have otherwise.

I saw a Pelagic Cormorant bring up a pretty good sized fish. I was going to try for a picture of it, but unfortunately I didn’t have my camera ready, and by the time I got it, the fish was gone. I think it was too big for the Cormorant to easily swallow.

Thursday/Friday:
The only time I spent outside on these days was taking Rowan to and from Preschool.
Weather: Thursday was quite snowy, with another few inches of snow falling. By Friday temperatures had warmed and it was raining.

Saturday: (Photos)
I realized today that I had lost my backpack with some stuff in it, probably on Wednesday. I took a quick trip downtown this afternoon to check the places I had stopped, but did not find it. After returning home, I took Connor and Rowan to the post office and then Market Center.

Weather: It was warmer with some wind and rain through the day. There was a period of clearing this afternoon around sunset that last long enough for the full moon to rise over the mountains. The warm light at sunset was pretty nice. 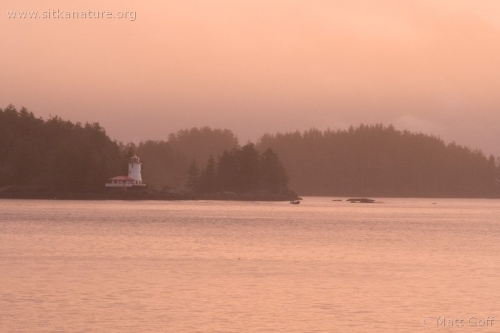