I have had a few responses to the Loon Identification post I made a couple of days ago. One of them pointed out that there is a discussion of Loons in the Peterson Field Guide to Advanced Birding by Kenn Kaufman. I have had the book for some time, but did not think to look in it, so that was helpful. I also appreciate the other responses I have had, as the discussion helped clarify for me the difficulties I am having. I now think that all but one of the birds I am having trouble with are all Common Loons (perhaps all first winter, but I’m not sure). The other bird is hard to be certain about due to the poor quality of the photo, but I’m leaning toward Red-necked Loon due to the relatively small bill and the general lack of pattern on its neck.

Below is one photo of each of the other loons in question. I have arranged them from the most Pacific Loon-like to the least Pacific Loon-like, to my eyes. (Numberings are from the previous post, look there to see additional photos of some of these loons.) 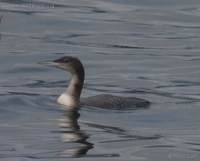 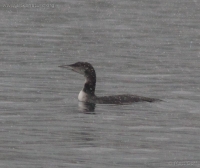 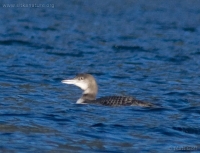 It seems to me that the first five pictures above show something of a continuum of patterning on the neck. However, it also seems like lighting, posture, and positioning play a significant role in the apparent patterning (or lack thereof) on the neck. To me, the sixth bird looks signficantly different than the first five, but it’s worth noting that it’s also the only one without its head/neck extended up rather then folded down a bit. 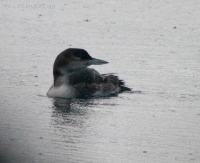 Upon realizing that I had misplaced the third picture of Bird #4 (the one that’s in the list above) and it actually belonged with these two, I came to think that probably all of the birds were Common Loons since the third picture fit into the continuum of birds that looked a little unusual for Common Loons and had elements suggestive of Pacific Loons, but also, in different postures, looked very much like a Common Loon.

Of course, I could be wrong about all of this, but I like to think I’m on the right track. Hopefully someone will set me straight, if I’m not.

Questions that remain for me are:

How variable is the neck pattern in Common Loons? Does the first bird, which seems to have no neck pattern at all, but otherwise looks very much like the other birds, fit within this variation?

How variable is the amount of white around the eye in Common and Pacific Loons? Pictures I have of birds that are clearly Pacific Loons (scroll to bottom for photos) seem to show white around the eye, though the field guides I’ve looked at suggest there is not any. The birds pictured above do not have as much white as other birds I have taken pictures of that are clearly Common Loons (scroll to bottom for photos), and less than the field guides I’ve looked at seem to suggest they should have.

Is it unusual for a Common Loon to show a chin strap, as Bird #8 seems to?