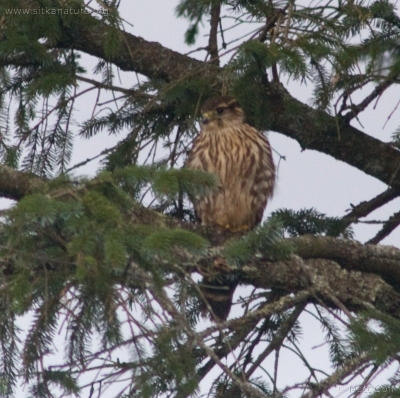 Connor (my six year old son) and I were over at Alice Island today when I mentioned to him that someone had reported a Merlin and an owl in the last few days. He was pretty excited about the possibility of seeing either one of these birds, as raptors seem to be one of his favorite kinds of animals. After waiting out the hard rain under a Mountain Ash tree, we slowly rode the bike (+trail-a-bike) around the new paved road.

When we reached the place where the road most closely approaches the water, Connor told me a cormorant was out there. It was actually a Common Loon, but he has not seen one of those before, so I was happy that he remembered cormorants. We sat and watched the loon for a little bit. He looked through the binoculars while I tried to get some pictures of it from the rocky beach.

While I was walking down the beach, I coincidentally got closer to a lone Glaucous-winged Gull perched on a rock just a little ways off shore. It made an odd call that I do not remember hearing before. The call was a fairly rapid staccato that it repeated until I stopped getting closer. When I started moving again, it called more, again until I stopped. I am guessing the call was in response to my approach. Normally gulls just fly off if they do not like my approach, but this one gave no indication that it intended to leave.

After a few minutes with the loon, we continued on with the only birds we saw the occasional gull flying over the entrance to Sealing Cove. I did finally hear something I thought might be a sparrow in this distance as we neared the condos, but still we were not seeing any song birds. We were just passing the old elementary school when I changed my mind and decided to go back along the overgrown dirt road behind the school.

We were behind the school playground when I saw some birds in the 12 foot high alders that grow between the road and the shoreline. The light was dim and the birds moved fairly quickly before stopping, but I thought they might be Varied Thrushes or starlings. I got a couple more brief looks and thought they looked more like starlings. However, their behavior was not consistent with behavior I have previously seen from starlings. Normally starlings are constantly chattering and even when they fly up after I disturbed them, they do not make any effort to hide their presence. These birds were completely quiet and apparently working hard to not give away their location. When they did move, they made very rapid and direct short flights. So much so, that as we walked into the alders a little bit to get a closer look, it was still hard to get a good look as they moved away from us.

I did finally confirm for myself that they were starlings and we walked back out to the road. Connor asked about the way they were acting and I realized what they were doing would be consistent with something scary nearby. I told Connor they were probably afraid of something that might want to eat them, so we should keep our eyes open in case a Merlin or owl was perched up in a tree watching. About that time I heard a sqeaking call coming from not too far away, so we went over to investigate.

We walked along a short path by an old refrigerator and through an overgrown passage that was about right for Connor but had me pushing through leaves and branches. As I came out into the open again, I heard the call, and then saw a bird startled by my approach. A Merlin had a starling on the ground and when I approached it tried to fly (probably with the starling) but got hung up in the shrubs. It paused for a few seconds with back toward me and wings outstretch. It was there just long enough for Connor to come up and see it, before it flew a short distance to a rock. The starling was obviously shaken up, but made a retreat back into the alders.

The Merlin regarded Connor and me, and seemed to want to get back its dinner. It did not take long to decide we were not something it wanted to be a part of and it flew off along the shore and quickly out of sight around a bend in the shoreline. The starling was still not too far back in the trees, and when Connor went to look at it a little closer, it flew away. I’m not sure how bad its injuries might have been, but I think the Merlin must have had it in its grasp for a little while before we showed up (given the behavior of the starlings for the minutes leading up to our discovery), so I was actually a little surprised the starling was still alive, let alone able to fly.

I thought the Merlin might have flown and perched somewhere along the shore, so we took the short spur that formerly lead to a bridge across what is now the entrance to Sealing Cove. Once on the beach there, I saw the Merlin perched on a spruce tree not too far away. I was able to get a couple of pictures before it flew away, again rapidly disappearing around a bend in the shoreline. I sent Connor back up the way we had come to see if he could see it up there, and I continued around the shoreline.

Upon rounding the bend, I saw it perched on a rock not too far from where we had first observed it with the starling. It did not remain long before it flew up to a tall spruce tree by the condos. Just after it landed, I saw a second Merlin fly over to the spruce. They interacted briefly, with one flying off over toward the bridge. I’m not sure where the second bird came from, but it seemed to be from the general area of the Elementary School and the trees behind it. After seeing the second bird, I am not sure whether the birds we saw individually were all the same or not.

I went back to the bikes and Connor wanted to see the Merlin again, so we road back out to the road. When we could see the spruce, I pointed out the bird. I did not see it fly off, as I was steering the bike, but Connor told me it flew down and disappeared behind the buildings.

I was a little surprised how excited Connor was by all of this. He talked about it almost non-stop as we pedaled through a downpour with the low-angle sun casting very yellow light through the clouds and rain. When we got home, he told his mom and sister about it, drew pictures of the Merlin, and got excited all over again when he looked at the pictures I took. At bedtime he wanted to use his quiet time to find Merlins in the raptor book his Uncle gave him for his birthday. I’m sure he will ask about going to look for Merlins again tomorrow and on many days to follow.