Although I took some photos today, my camera apparently died between earlier today and this evening when I went to download the pictures. Now I have no way of getting the pictures off the card until I get the camera fixed or replace it. At this point, I’m thinking I will probably just replace it. Perhaps if I send it in and find repairs are not too expensive, I can use it as a backup, for kayaking, or just sell it.

This morning I stopped by Swan Lake after dropping Rowan off at preschool. Later in the morning I went on a hike up Mt. Verstovia trail to Picnic Rock and was back by 2pm.

Weather: This morning was the first time I have noticed the temperature below 40. It was 38 on the thermometer when I looked, but I did see some frost on our roof and on the ground. The colder temperatures were due to clear skies last night. It was sunny for the early part of the day, but clouds started moving in later this morning and by later this afternoon it was overcast. It started raining this evening. Winds were calm.

Birds: At Swan Lake I saw a Hooded Merganser, an American Wigeon, a Northern Pintail, the two scaups (I’m thinking probably Lesser Scaups, now) that have been at the lake, plus an additional three scaups that flew in briefly, and the Cackling Goose. I also heard, then saw, a flock of migrating geese overhead.

As I was leaving the house to go on the hike, the Austin House Song Sparrow was chirping with what seemed like a little aggitation at the top of a shrub/tree.

While cross the SMC Road bridge over Indian River, I noticed 6 Common Mergansers in the deep pool where there’s a bend in the river.

I went up Verstovia hoping to may see a migrating raptor or two, but other than a lone Bald Eagle soaring when I was relaxing on Picnic Rock. I also saw a fair number of gulls fly over. They seemed to be coming from the direction of Katlian Bay. After the passed overhead, I saw them circling over Silver Bay, but I’m not sure what they did after that. It was a little strange to me to see the gulls flying over land like that. I did see/hear several Varied Thrushes on the trail, as well as Winter Wrens, chickadees, and probably some Golden-crowned Kinglets.

On the way down, when I was taking a short break on a step, a female Varied Thrush came up the hillside below me. When she came into sight, she looked up and saw me, then got a little concerned. She flew up to a branch, watched me and started making the ‘chup’ call repeatedly. A male (her mate?), was behind her and flew up to look when she started calling. He did not seem too concerned and went back to foraging after a moment or two. She called at me for a while before flying a distance away and returning to foraging.

Other Notes: I was interested to see Broad-petalled Gentians were still blooming above the treeline. There were also a few Subalpine Daisies that were just finishing up their blooming. The Deer Cabbage was pretty much all yellowed and down. I’m guessing the gentians won’t be there for long, as they don’t seem to be plants likely to endure the cold too well, and it had clearly frosted pretty good up there last night. I suspect they’re still blooming because the snow came off pretty late this year, and they are typically late summer bloomers, even when the snow melts early. 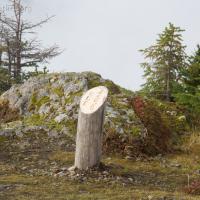 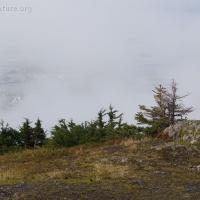 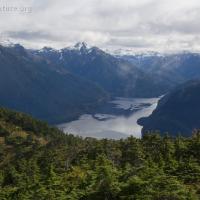 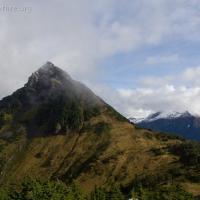