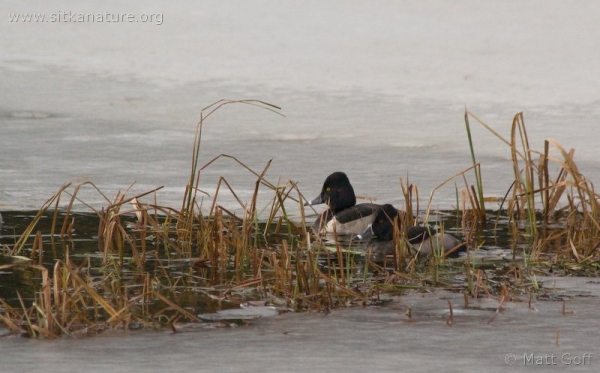 I made it out a couple of times in the last two days. Thursday I went downtown and stopped by Swan Lake on my way back. Friday was the first bird walk with the birding class. We braved the chilly weather to walk through Totem Park.

Weather: It’s been cool and a little bit blustery. Squalls with rain, snow, and graupel blew through. Between squalls the sun would sometimes briefly show through.

Birds: The female Northern Pintail was back at the lake on Thursday. The Glaucous Gull was there as well. 10 or so Ring-necked Ducks were in the various small patches of open water. There was also the usual assortment of other gulls and mallards.

One bird that has been conspicuous by its absence is the Golden-crowned Kinglet. Many winters they are fairly often seen or heard throughout, but it seems they have not stayed for this winter.

Other Notes: There was an ornamental tree on Etolin street starting to bloom. It seems a bit early for that. It’s also not been too warm, so I am puzzled about the flowers showing up.