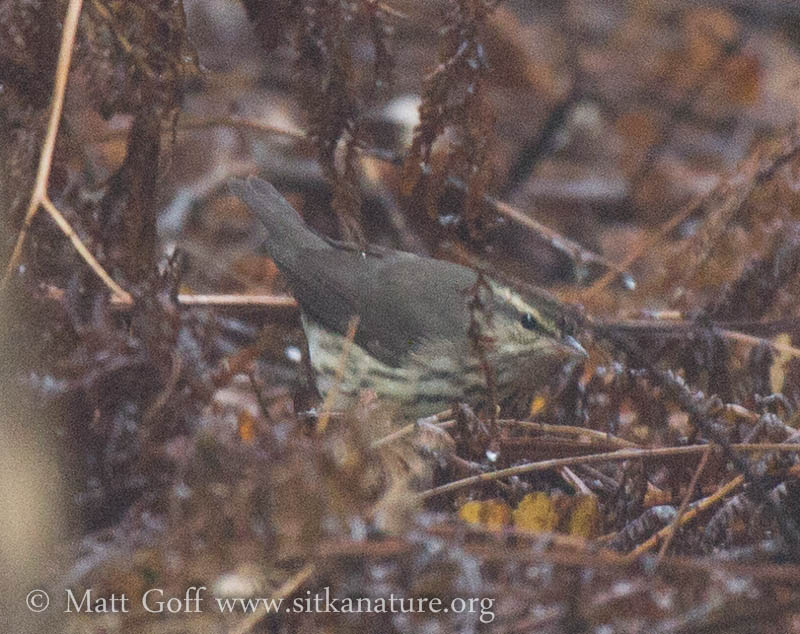 Rowan came in from her morning walk a bit earlier than I expected. She told me she had run back from by Sage Beach where she had seen a bird she did not recognize. Rowan’s not quite as excited about birds as Connor is, but even though she doesn’t always remember names, she is still pretty good at recognizing the usual birds around here, so I was curious about what she might have seen. I had a bit of work to finish up, so she grabbed her camera and headed back without me. When I got down to the sea walk between the science center and the park, I found her with her camera out looking intently in the bushes beside the trail.

The bird had still been there when she returned but had flown off. While we tried to find it again, she told me about it. She had first noticed it when she heard a chirp that caught her attention. She was able to see it in the bushes on the upland side of the trail. She described it as mostly brown with pale stripes above and below its eye. Before she could say much more, she caught sight of movement on the beach side of the trail and darted off in that direction. I saw quick movement through the bushes, but nothing that would have let me know there was anything other than one of the several Song Sparrows that winters in the bushes along the shoreline. Rowan was sure however, and a few moments later I did see a different looking bird pop up on top of a log before disappearing again.

I stayed on the trail and watched for it below. I got a brief but good look at it on the rocks below me. It did look unfamiliar to me. I was reminded of a pipit, though I was sure it wasn’t an American Pipit. I’m not sure about other species of pipits, but I tend to think of them as birds of open areas, and this bird was showing a strong preference for dense thickets. It bobbed it’s tail a bit, and gave a sharp call note as it flew off and disappeared. That was the last I saw of it for a little while.

After a few minutes of looking, I took a break to check a bird book and became convinced that what I had seen was a Northern Waterthrush. Before long, other folks showed up to look for the bird as well, but none of us were able to find it. After no success with the waterthrush, everyone other than Rowan and I headed off to go back to work (or get some lunch). I went to find Rowan (who had gone down towards the park). I found her down off the sidewalk with her camera out concentrating on the bushes in front of her. She had refound the bird by park entrance and was trying to get photos of it. Unfortunately, it flew across the street into a dense thicket of trees and shrubs, so she wasn’t successful in getting a picture (which frustrated her a bit), but at least we now knew where it was.

Over the next little while she and I both were able to watch it and were joined a couple of the other folks who were still in the area and came back to look as well. I was able to get a couple of pictures to document it (the first documented for Sitka – the only prior report I know of is from spring 2007 when one was seen but not photographed along Indian River). I went back later this afternoon when the light was better in hopes of getting a better shot. I did find it again in the same area and was able to get another identifiable photo, though not really of the quality I might hope for. I heard that it was still in the area around 5pm this evening, so it seems this bird wasn’t inclined to wander very far (unlike some other vagrants that have shown up and promptly disappeared, never to be refound). I may look again tomorrow to see if it’s still around.

This evening I did a little further research, and it seems this bird is probably the latest record for Alaska. Last year a Northern Waterthrush was seen in Ketchikan on 21 October. That bird was reported to be the latest for the state by a couple of weeks. I was also interested to see that record was Ketchikan’s first for the species. Although considered Uncommon in Southeast Alaska, these birds are primarily found on the northern mainland, as best I can tell. 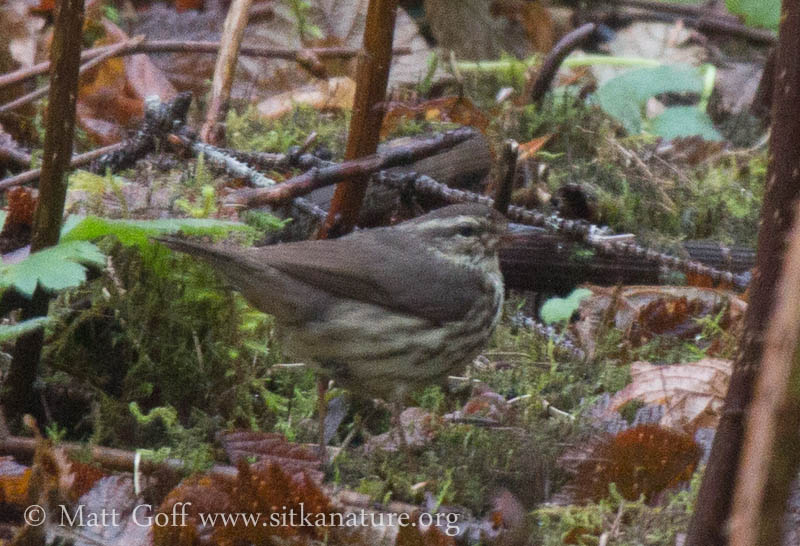