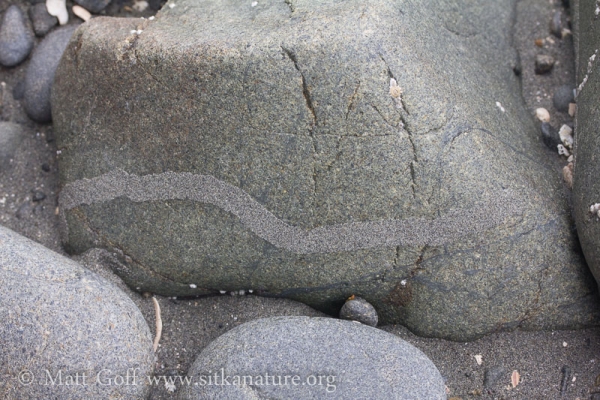 I almost passed by without noticing the odd streak of sand across a face of the rock embedded in the beach. I was in a broad transition zone between the sandy lower beach and loose cobbles at the base of a bedrock cliff at the highest intertidal zone. It would have been easy enough to dismiss sand on the rocks as errant grains left when the tide last splashed at this level a few hours before, but a second look revealed there was more to it; a sharply defined band with a bit of a meander that suggested something other than the result of wave action as the tide was dropping. As best I could tell, it looked like a track, but I can’t think of what might leave such a track of sand. Further investigation revealed several other rocks subject to similar crossings, so whatever left it must be reasonably common.

Although the actual sandy beach here is 10+ feet away, there is ample source sand around the base of the rocks and large cobbles that mark the this section of beach. The sand was dry (and brushed off easily) when I touched it, though either it or the rock must have been at least damp when it was placed (or much of it would never have adhered in the first place). I was visiting the beach because of an exceptionally low tide, so it had probably been close to 6 hours since the tide was up at the level where I observed

Originally I was going to include my thoughts about how this trail came to be, but I decided just in case someone wants to ponder the question for a bit, I’ll hold off and publish a followup post with my thoughts after a day or few. Feel free to leave a comment with additional questions about what I observed if there’s something else you would like to know to help figure it out. 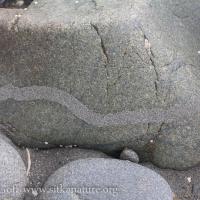 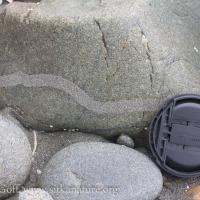 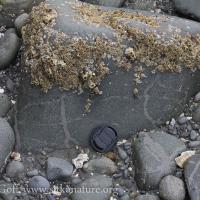 1 thought on “Sand Trails on Rock”