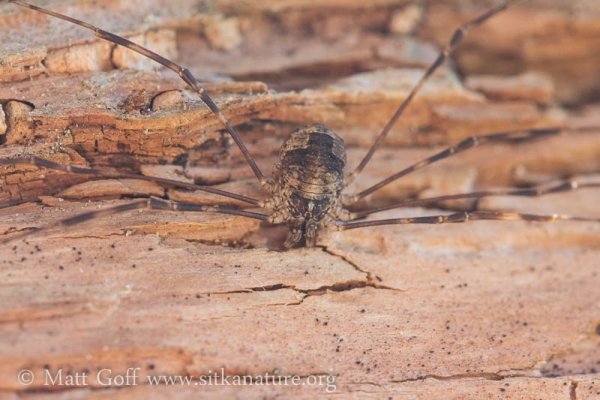 Although it was my turn to pick where we would hike today, I offered to trade days with Rowan since I was not feeling up to doing anything very long on this sunny Saturday. She prefers shorter outings with less walking, so I figured she would opt for something along those lines. Perhaps thinking that we would need to walk somewhere, she chose Mosquito Cove or the Starrigavan Estuary Life Trail. When we were driving out the road, I asked if she would prefer to just go down to the south beach at Halibut Point Rec to explore around in the woods, she enthusiastically said yes.

I spent the better part of the three hours we were there just laying on the moss enjoying the warmth of the sun. I feel like I have lingering respiratory issues from a previous cold, and it has sapped my energy, so it was nice to relax and rest while Connor and Rowan did their own things. It was relatively quiet while we were there, with fewer than 10 other people walking by. I also saw a couple of kayakers in a double with a dog between them. Later on someone seemed to be doing a little swimming for exercise (wearing a wetsuit) along the shoreline.

During the last part of the time we were there, I sat up against a tree and happened to notice a harvestman/daddy-long-legs (Opiliones) on an old rotting branch. It stayed still while I took some photos, though eventually it hoisted its body up on impressively spindly long legs and moved under the branch. At this point we were ready to go, so I left it to its own devices.

Rowan noticed a couple of interesting things during her wanders. She said she scared a small-ish raptor out of the woods. She was not sure what it was, though did mention it had a striped/barred tail. She later said it could have been a Merlin. I wonder if it might have been a Sharp-shinned Hawk. She also found a young Yellow Cedar tree growing. I don’t recall seeing (m)any cedar trees in the forest around the recreation area (it mostly looks like aging second growth to me), so it’s interesting that one would get started there. 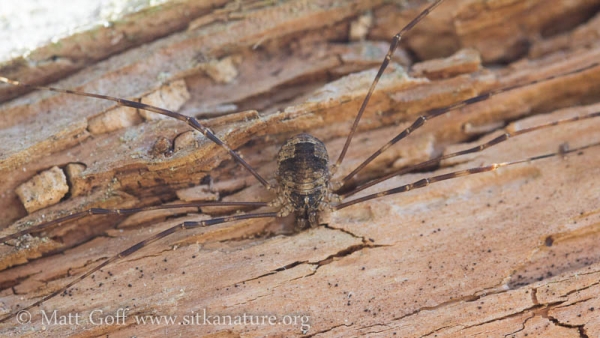 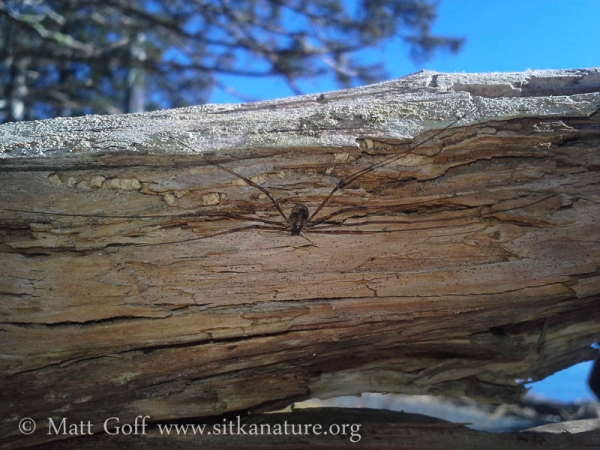