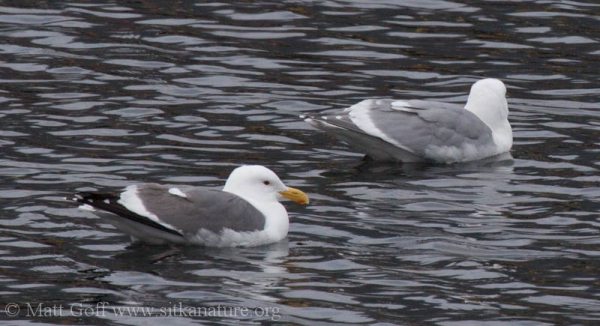 Long-line season opened a little later this year, just late last week as I understand it (I recently learned that the season can open anywhere between the end of February and the end of March). As a result, there have been few concentrations of gulls to look at so far this year. That being the case, I didn’t expect to see much this morning while I was walking over to UAS for class, and indeed, the channel was pretty quiet as I looked over it while crossing the bridge. There were a few gulls in the little cove between the work float and Coast Guard dock, and while none of them stuck out strongly to my eyes, I decided to take a quick look through my binoculars as I walked by (I was already going to be a couple minutes late to class).

With binoculars, one of the gulls seemed distinctly darker and made me think I might be looking at a Western Gull. I only had time to take a few quick shots in the not yet bright light and I’ve included the best of them with this post.

Compared to the first Western Gull I saw back in 2008, this one does not seem to have quite as dark a mantle, nor are its eyes as pale yellow, but it does seem to match reasonably well with the Western Gull from last year. (This year’s gull’s eyes seem a bit darker in the photos than last year’s, but I think that’s because the pupils are much larger in this year’s due to the relatively dim light, whereas the one last year was in full sun.)

As I left class this morning, I saw a long-liner tied up at SPC and another down at North Pacific Seafoods, so it looks like long-liners are starting to deliver. There was much more gull activity in the channel, and while I was watching, it was clear there was some fish slurry that started being put out by SPC. Herring have not yet spawned, so I suspect that until they do (which could be any time in the next week or so), the channel will be pretty active with gulls, and there’s a decent chance this gull could be refound (though I did not see it the channel after class this morning). 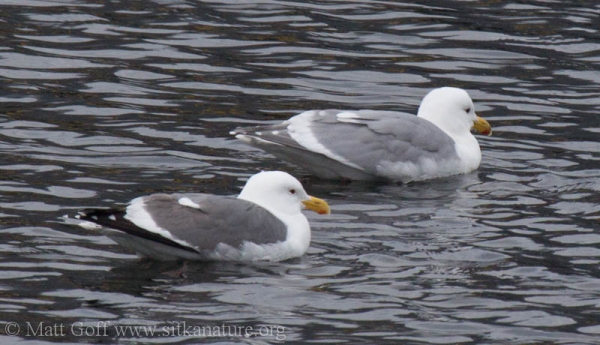