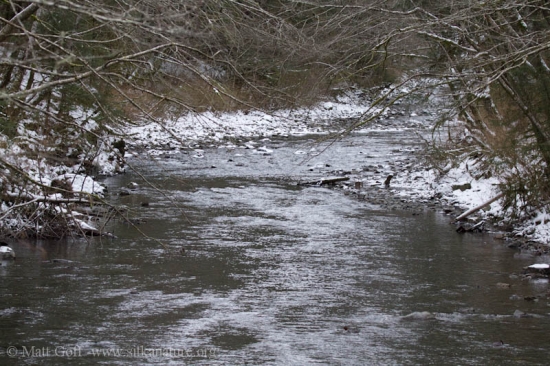 On our walk to the park last Friday, I noticed that Indian River had essentially no ice in it. Given the extreme (for here) cold we had been feeling for the past several days, I was a bit surprised by this. 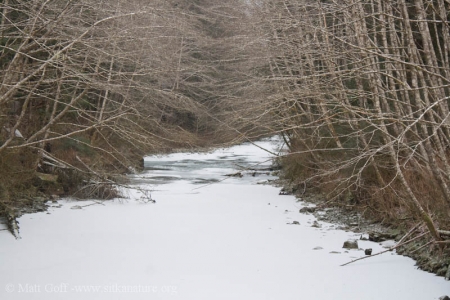 By comparison, last year after a few days of freezing temperatures that were not nearly as cold as this year’s, the river was nearly completely covered in ice at the park.

I heard from someone who hiked to Indian River Falls this week, and he said there was no ice on the river until after the first bridge – after which the river was almost entirely iced over. I have previously noticed this (at the time unexpected) ice distribution on Indian River and realized that the west fork of Indian River runs warmer and does not freeze. This is due to the fact that not far above the confluence, the entire flow of the river is underground in normal-low flow conditions.

My guess is the flow from the west fork this year is warmer than during the cold snap last year (it could also just be putting more volume out, taking that much longer to cool off to freezing, but the water levels didn’t seem that much higher to me). A plausible explanation might be the warmer and much wetter weather that occurred in December this year relative to last year. Perhaps this influx of relatively warm water takes a while to move through the ground, so the pulse of warmer water was still flowing even after a week or more of cooler weather.

A couple of questions come to mind that wouldn’t be that hard to collect data for: How do the west fork and the falls fork of Indian River compare in temperature over the course of the year. How fast does the river cool off moving down stream in cold conditions? The best way to answer the first question would be to place a couple of ibuttons in waterproof enclosures just up from the confluence along each fork of the river. (The trick would be getting them secure enough to avoid losing them in high water.) Probably the second question would be best looked at by actually measuring in several locations along the river during a cold snap.

4 thoughts on “Why no ice on Indian River?”