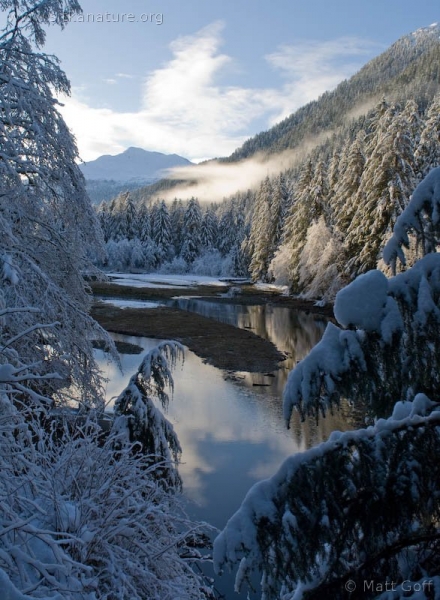 Salmon Lake trail follows Salmon Creek up from the end of Silver Bay to Salmon Lake, and then further on up the valley, ultimately branching with the main current trail going over to Redoubt Lake Cabin, and a historical trail that leads up to the Lucky Chance mines (though I’ve been told it’s difficult to find and follow in many locations). Last Sunday I had the opportunity to go out to the trail and hike around for a bit. 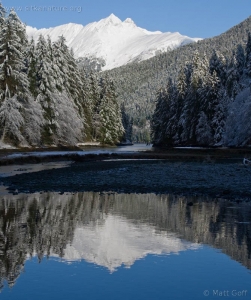 Given the early winter season and a blanket of snow covering the trees and much of the ground, there was not too much to look at in terms of plants, but the scenery was quite stunning. There were deer tracks around, but I never saw a deer. A mink showed up on along the frozen lake shore, and there were several species of birds, including American Dipper, Brown Creepers, Hairy Woodpeckers, Mallards, Golden-crowned Kinglets, and a late Hermit Thrush.

The valley bottom forest structure seems much different than I am used to seeing in Indian River Valley (the place with which I have the most familiarity). The wide spacing of trees and predominance of Sitka Spruce are particularly notable. I’m not sure what might be the underlying reason for these differences. 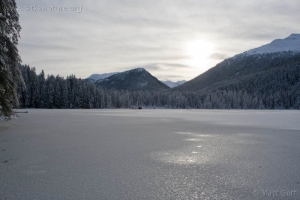 Salmon Lake was covered in a thin layer of frozen slush/ice. It might have been an inch thick, not nearly enough to support my weight, but a mink that scampered along the ice near the shore seemed to be in no danger of breaking through. At the inflow, there was still a patch of open water above the main body of the lake.

In clearings above the lake, both the upper lake sedge marsh/meadow, and muskegs further up, the snow was 1-1.5 feet deep or so. It was not as deep in the woods, nor the openings at the edge of the estuary below the lake.

This was only my second trip to Salmon Lake, the first being in October 2007. Neither trip has been especially well timed for seeing how the distribution of herbaceous plants growing in the valley may differ from other locations, but I do hope to get back for a future visit to look into it a bit more.

While out there, I also learned that owls (probably Western Screech-owls) are a frequent visitor to the NSRAA weir site, and toads are also not hard to find.