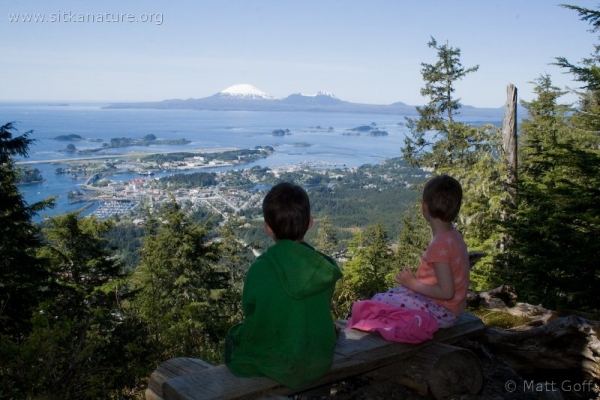 Connor, Rowan and I hiked up to the ridge on Verstovia today.

Weather: It was clear with light winds. Temperatures were 60 or higher, it certainly felt hot in the sun. The first snow we found on the trail was just below the second viewpoint, and there was patchy snow from there to the ridge. The ridge was still covered in fairly deep snow.

Birds: I noticed two different birds that appeared to be gathering nesting materials, a Pine Siskin and a Chestnut-backed Chickadee. The chickadee seemed to be part of a pair. The second one stayed up in the shrubs catching insects while the first gathered materials off the ground. I think it may have been gathering dog hair, lichens, or both.

Along the lower part of the trail I heard lots of bird song, mostly from Townsend’s Warblers and Ruby-crowned Kinglets. On the ridge it was fairly quiet except for a couple of vocal Winter Wrens. It almost makes me wonder if some species do a first nesting at lower elevations then move up the mountain for a second go around after the snow has melted.

Flora: It was interesting to chase spring up the mountain. At the start of the trail, the Purple Sweet-cicely (Osmorhiza purpurea) was already going to seed, and the Stream Violets (Viola glabella) were well past their prime. As we went up the trail, I eventually noticed one of our earliest spring flowers, Fern-leaf Goldthread (Coptis asplenifolia) still blooming, but most other things were just starting to come up.