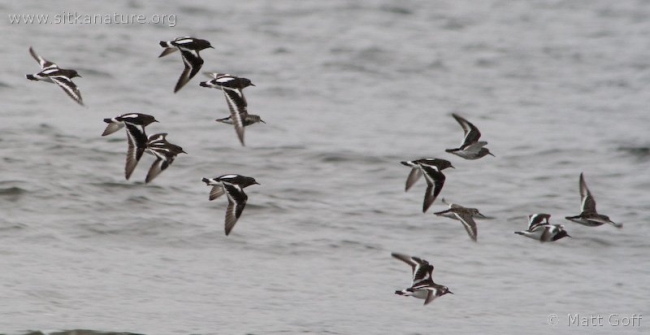 I took a walk to Totem Park this afternoon to look for migrants. I also made a quick stop at Swan Lake after hearing a report of a new goose.

Weather: It was blustery today. Winds were blowing strong out of the south and west at Totem Park. Squalls with rain, sleet, and hail were frequent. Later in the afternoon it started snowing.

Birds: There were three Black-bellied Plovers at Totem Park, the first I’ve seen this year. Also were three American Wigeons, a flock of 50 shorebirds, mostly Black Turnstones but a handful of Surfbirds and Rock Sandpipers as well. Other birds I saw at the park included 2 Canada Geese, Common Merganers, Common Goldeneye, Barrow’s Goldeneye, Bufflehead, Mallards, Mew Gulls, Glaucous-winged Gulls, dark wing-tipped sub-adult gulls that I think might be Herring Gulls, and Harlequin Ducks.

At Swan Lake there was a Trumpeter Swan a Greater White-fronted Goose, Mallards, and quite a few scaup.